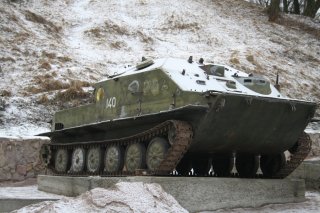 Here's What You Need to Know: In late 2003, the U.S. military obtained four of the Ukrainian tanks, which apparently underwent tests at the U.S. Army Aberdeen Test Center in Maryland in December 2003 and January 2004. Now it seems that another Ukrainian MBT is back in the United States and ready for a fresh round of testing.

A Ukrainian Oplot-M main battle tank (MBT) has come to America. It is Ukraine’s heavily modernized T-84 Oplot, a highly advanced version of the Soviet-era T-80U, and was developed by Kharkiv Morozov Machine Building Design Bureau for the Ukrainian Armed Forces. It was designed to combat ground-based as well as low-flying, low-speed aerial targets while providing superior protection and high mobility for ground forces.

The fifty-one-ton Oplot-M should be seen as a serious MBT, and it is heavily armed and armored. The tank has a conventional layout with the driver's compartment at the front, fighting compartment in the middle and engine at the rear, while it can accommodate a crew of three. It is equipped with a new generation of Duplet built-in Explosive Reactive Armor, which can protect the vehicle from tandem warheads. Additionally, the MBT is fitted with a Shtora countermeasures system, which reduces the hit probability of an enemy anti-tank-guided weapon system with semi-automatic guidance.

Back in the USA

Dylan Malyasov of DefenceBlog reported on Tuesday that the tank was delivered by Ukrespetsexport within the framework of a contract for the new combat vehicle. He noted this is not the first time Ukraine has supplied tanks to the USA for testing. In 2003, the U.S. Government obtained four T-80UD main battle tanks with an installed Drozd Active Protection System (APS) from Ukraine.

Last year it was reported that there were pictures of a Ukrainian tank with a Drozd Active Protection System (APS) installed on it circulating online. That vehicle had been lined up at the U.S. military’s Yuma Proving Ground (YPG) in Arizona at the Threat System & Target Simulation Yard near other Soviet and Russian combat vehicles. It is common for Yuma to acquire foreign-made vehicles to train U.S. troops, and it seems likely that the Ukrainian military would have provided a tank for testing/training purposes, as well as to familiarize American soldiers with the platform.

In late 2003, the U.S. military obtained four of the Ukrainian tanks, which apparently underwent tests at the U.S. Army Aberdeen Test Center in Maryland in December 2003 and January 2004. Now it seems that another Ukrainian MBT is back in the United States and ready for a fresh round of testing.