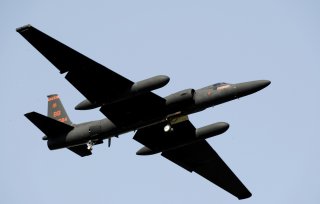 After a brief flight, Schumacher made a number of practice approaches, ensuring he could manage the difficult aircraft as it closed with the moving vessel. With the aircraft carrier moving at 30 knots, the U-2 approached it at just 80, held aloft by its high-lift wings. As touched down on the flight deck, the U-2’s relative speed to the carrier was just 50 knots, but even at such a low speed, landing the “Dragon Lady” is no easy feat.

“Although the takeoff was very successful, the attempted landing was not. The aircraft bounced, hit hard on one wingtip, and then just barely managed to become airborne again before reaching the end of the deck,” the CIA report states.

After the heart-stopping failed landing attempt, Schumacher decided taking off had been enough and diverted to Lockheed’s airfield in Burbank, some 100 miles away. The mission was a partial success, but it was enough to prove the concept was viable. Right away, the CIA green lit another round of changes to a handful of U-2s for further testing, and sent two teams of pilots to Monterey and Pensacola Naval Air Stations to become carrier certified.

Modifying the U-2 and the aircraft carrier for the job

Lockheed’s modified U-2 for aircraft carrier duty was dubbed the U-2G, and it saw a number of changes to the original design. First, heavier landing gear was added to withstand the force of carrier landings, with care taken to ensure the new system was rated for double the deceleration of the standard aircraft’s brakes. Heavier-pressure bulkheads were added around the landing gear to withstand impact with the carrier’s deck. Lockheed took arresting hooks for their T2V SeaStar jet trainer and modified them for the U-2, incorporating augmented longerons in the fuselage to better withstand the forces exerted on the airframe when it caught the carrier’s cables. The hook was then covered by an aerodynamic plastic fairing that was jettisoned upon approach to the carrier.

The U-2G also added a mechanically operated fuel jettison system that would allow the aircraft to dump its fuel in the event of an emergency or if it was approaching a carrier with too much on board to manage a safe landing. Mechanical spoilers were added about midway outboard on the trailing edge of each wing that could be activated via a switch near the aircraft’s throttle. When engaged just before landing, the flaps would deploy and stall the U-2 almost immediately, allowing it to “spot-land” more accurately. These added flaps were considered the most important change to the U-2 by the CIA, who believed it would resolve the aircraft’s landing woes.

On the carrier itself, lightweight arresting cables that measured one-inch in diameter replaced the standard 1.5-2 inch cables commonly found on flight decks. The change was made to minimize how much vibration the cables sent through the body of the spy plane as it ran them over during landing.

By February of 1964, the CIA had three U-2Gs ready for testing and two flight crews trained to fly them. On March 2, Schumacher was once again chosen to fly the newly renovated U-2, this time departing from a land-based airstrip with orders to land aboard the USS Ranger, a Forestall-class super carrier sailing off the California coast.

Schumacher made a series of touch-and-go landings on the Ranger, coming down onto the deck and then throttling back up to get the U-2 back into the sky. Finally, he felt as though the conditions were right and the aircraft could manage the landing and made his final approach. As he brought the U-2 down on the aircraft carrier, its new tail hook grabbed the cable just as it was intended, but the rapid shift in momentum and weight pitched the tail upward, driving the nose of the plane into the deck and breaking its pitot tube (an instrument used to measure air speed). The damage was minor and the team on board were able to repair the aircraft in just a few days.

Once mended, Schumacher and other CIA pilots made a series of successful take-offs and landings aboard the Ranger, resulting in five pilots the CIA deemed certified for such operations. The effort would culminate two months later, when the first U-2 was launched from an aircraft carrier in an operational setting: monitoring French nuclear tests at Mururoa atoll, a test site in French Polynesia.

Two reconnaissance flights were launched over three days without incident and with the French totally unaware. The mission was a success, but it would be the last time a U-2G would launch from a carrier for active operations.

A bigger U-2 takes on aircraft carrier duty

In 1967, the U-2R entered service, boasting a design that was 40% larger than its predecessor. All that added size came with a number of significant improvements, including quadruple the payload capacity of previous U-2s and twice the range. Within just two years of entering service, the CIA was already itching to find out how this new U-2 would fare aboard an aircraft carrier.

They added a reinforced arresting hook, and in order to make carrying the U-2 aboard an aircraft carrier more manageable, the outer six feet of each wing was modified to fold up, like many other carrier-aircraft.

Former Air Force fighter pilot turned senior Lockheed test pilot Bill Park was chosen, alongside four other CIA pilots, for abbreviated carrier training before being tasked with putting the U-2R to the test. The first test flight of this new iteration U-2 from an aircraft carrier took place off the deck of the Kitty Hawk-class USS America on November 21, 1969. Things were progressing well, but the landing attempt had to be canceled when it was discovered that the ground crew had forgotten to remove the locking pin from the tail hook assembly. However, every subsequent flight was a success

“The airplane demonstrated good wave-off characteristics, and I felt at the time that landing could be made without a hook,” Park later recounted.

But despite the success of the trials aboard the America, the CIA was having trouble finding the value in fielding a U-2 aboard an aircraft carrier. While it did eliminate the need for foreign airstrips, a carrier strike group wasn’t exactly sneaky, nor was it cheap. To make matters worse for the U-2 and its aircraft carrier aspirations, satellites were beginning to seem like a better alternative for many reconnaissance missions.

“Although successfully tested from the deck of the USS America off the coast of Virginia in 1969, the U-2R did not fly operational missions, its technological capabilities having been surpassed by space-based reconnaissance platforms,” the CIA explains in its official history of the program.

After the CIA gave up, the Navy gave the U-2 one more chance

The CIA may have felt that carrier strike groups were too pricey and high profile for their secret missions, but the Navy saw the potential for a powerful maritime intelligence tool in the revamped and more powerful U-2R. In 1974, they chose to obtain their own U-2 for carrier testing.

This time, the modifications weren’t just to support take-off and landing, however. A new nose section was added to house an X-band phased array AN/APS-116 radar. Equipment pods on the leading edges of each wing were also added. On the left side, the pod housed a Return Beam Vidicon camera that could produce high-fidelity images without the need for film. The pod on the opposite wing housed an AN/ALQ-110 radar signal tracker that was linked to another camera.

Inside the aircraft’s payload bay, a suite of electronics were added, including an actual data link that would allow the U-2 to send radar data back to the aircraft carrier, ground-based installations, or any other ships with line-of-sight in almost real-time. A Navy-variant U-2 carrying these systems represented a significant leap forward in maritime surveillance for America’s carriers, but by then, aircraft weren’t the only way to keep tabs on large swaths of ocean.

The Navy dubbed this heavily modified U-2R the EP-X, but even the added capability of this new platform wasn’t enough to outpace rapidly advancing satellite technology. For the third time in a decade, the U-2 had proven it could operate aboard America’s aircraft carriers, but was deemed too impractical for continued use.