The United States is Preparing to Counter Anti-Satellite Weapons 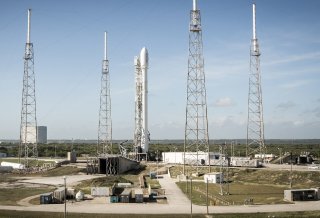 Here's What You Need to Know: Space war strategy continues to receive very large amounts of attention from the Pentagon and U.S. Space Command.

If a Russian or Chinese Anti-Satellite (ASAT) weapon streamed into space and exploded U.S. military satellites, friendly forces would instantly become very vulnerable to significant and extremely destructive enemy attacks….-- space-based infrared missile detection could be destroyed, GPS communications could be knocked out, guided weapons could jam and derail before hitting their targets and war-critical command and control could simply be “taken out.”

Any, all or part of this could happen in as little as 10 to 15 minutes once a satellite attacking missile is launched from the ground. Lives will hang in the balance as alerts are sent through U.S. command and control and decision-makers scramble to determine the best countermeasure with which to protect its space assets. Space war is no longer a distant prospect to envision years down the road --- it is here.

Recognizing the seriousness of this vulnerability, the Pentagon, U.S. Space Command, Missile Defense Agency and industry are moving quickly to integrate Machine Learning and AI into space-based systems and technology. The intention is to of course accelerate threat detection and get crucial information to decision-makers.

“When a launch is detected, a spaced-based alert signal sends something down to command and control, which goes to the Air Force. It is then evaluated by computers and an alert is sent through the ballistic missile defense system. A mathematical formula determines its speed, trajectory and where it will hit, or land,” a Missile Defense Agency official told Warrior.

In order to destroy an ASAT weapon, defenders need rapid access to vast pools of information, according to Ret. Lt. Gen. Christopher Bogdan, Senior Vice President, Aerospace Business, Booz Allen Hamilton, who said that commanders need to know “Where is it (ASAT weapon) going up in the atmosphere? What is the signature or energy of the launch? What is it targeting and where might it hit its target? You need to figure out where the risk is.”

“First things you need to know is what is going on up there.There are a lot of different catalogues and libraries of what is up there --- and they are not all combined. Space Command and DoD are trying to combine space catalogues so they can have a single unified data library where everything including adversary information gets catalogued,” Bogdan said.

“You are going to need strong analytics and you will need to look back at previous data using AI and Machine Learning. You have an ability to figure things out quickly because you will have AI going through all the different possibilities for how to protect assets. The loop gets quick and short,” Bogdan explained.

“The models and the algorithms you create for AI are only as good as the data you put in there. It is a matter of access to the right pools of data and the quality of that data,” Bogdan said.

Interestingly, a 2018 essay from the Joint Air Power Competence Centre (JAPCC) called “The Future Role of Artificial Intelligence” addresses the impact of AI upon the OODA-loop decision-making process referred to by Bogdan. (JAPCC is a think-tank analysis center sponsored by 16 NATO nations to support the NATO mission. Headquartered in Germany)

The paper analyzes how AI will change or effect each stage in the process of the famous and well known Observe, Orient, Decide, Act process; the paper anticipates the “assigned future required AI roles and functions to each of the OODA steps.”

The essay states that when it comes to the “Orient” stage in the OODA loop, AI can “apply big data analytics and algorithms for data processing, then data presentation for timely abstraction and reasoning based on a condensed, unified view digestible by humans, but rich enough to provide the required level of detail.” (The Future Role of Artificial Intelligence.. Military Opportunities and Challenges. Andy Fawkes, Lt. Col Martin Menzel, DEU JAPCC).

The concept is to of course leverage the decision-making faculties unique to human cognition, keeping humans in the lead regarding command and control, while easing the cognitive burden placed on human decision-makers by providing organized, analyzed and easily consumable combat-crucial data. “This should include graphical displays of the situation, resources (timelines, capabilities, and relations and dependencies of activities), and context (point of action and effects),” the JAPCC Journal article states.

More pervasive or far-sweeping computer analysis can quickly run through a large number of contingencies and possible outcomes to provide commanders with an optimized set of response options. As technology progresses, there will increasingly be a need for human leaders conducting military command and control to use AI and computer automation to manage a massively growing data flow.

“Future intelligence, surveillance, target acquisition and reconnaissance systems will generate even larger amounts of (near) real-time data that will be virtually impossible to process without automated support,” the 2018 JAPCC essay states.

Space war strategy continues to receive very large amounts of attention from the Pentagon and U.S. Space Command. While several countries are known to be making investments in the development of space weaponry, Chinese and Russian activities have engendered a particular concern among Pentagon leaders, analysts and threat assessment professionals.

The Chinese fired a land-based kinetic energy SC-19 missile at a satellite in space several years ago, an action which inspired worldwide attention and condemnation. As long ago as 2007, they launched an ASAT test of a low-altitude interceptor. They struck and destroyed a defunct Chinese weather satellite and created tens of thousands of pieces of debris, an Air Force senior leader told Warrior several years ago.

Disaggregation and Diversity are among the most heavily focused-upon techniques which seek to deploy multiple satellites carrying both conventional and nuclear systems; Diversity tactics are aimed at using multiple satellites to achieve the same goal. This includes fielding “U.S. equipment that can use both GPS and Europe’s Galileo navigation system,” Air Force officials have said. Naturally, this technique would allow U.S. forces to use allied assets if U.S. satellites were disrupted or destroyed by enemy attack. A Distribution strategy designed to spread satellites apart which perform certain key functions to preserve a needed technology should some assets be destroyed. This could include deception tactics used to prevent potential adversaries from knowing which satellites perform certain functions.

The U.S. operates many Advanced Extremely High Frequency, of AEHF, communication satellites which have replaced the older Milstar systems; they operate at 44 GHz uplink and 20 GHz downlink. To compliment these systems, prepare for a new threat environment and better network satellites together, the Pentagon has been working on smaller, very Low Earth Orbit (vLEO) satellites which fly lower and faster in larger numbers. These satellites can more easily be networked together, share key signals and help build redundancy in the event that some are taken out by enemy attack.