The Updated Colt Mustang is a Perfect Concealed Carry Weapon 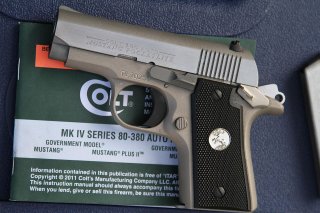 Here's What You Need to Know: Unlike most .380 pistols, the Mustang fires from a locked breech instead of straight blowback. It’s easy to use and about as reliable as you can expect.

The Colt Mustang has been around for nearly 200 years, and is likely one of the models America’s founding fathers would have approved of. After discontinuing the model for a while, Colt brought it back for its 175th anniversary back in 2011.

The new-and-improved Colt Mustang is a handy little pocket gun perfect for concealed carry or personal defense. The newer models are made with CNC machined slides, barrels, and frames, and feature a nickel finish. The hammer is also nickel-plated and comes polished on both sides of the frame.

While the slide and frame aren’t checkered, they do have a matte texture that helps with gripping. The grip itself is rather small, and most people will only be able to get three fingers at most around it. It’s good for the size of the pistol and feels nice in your hand, but might not be suitable for anyone with larger hands or who wears gloves.

It measures just about 5.5” overall and weighs less than one pound fully loaded (even lighter than the Walther P99!), making it very easy to store nearly anywhere. It’s one of the smallest pistols chambered in .380, but the recoil is surprisingly light! It’s very manageable and great for quick follow-up shots, if needed. The extended beavertail gives you an advantage here, as the sliding bar can travel all the way back.

As far as accuracy goes, you’ll have the best chance to stay on target from short distances. It’s not meant for long-distance shooting and is easier to point than to aim, but the standard sights do help with aiming a bit. Both the front and rear sights are 3-dot, just like the Taurus G2S, and the rear notch sight is adjustable for windage. The front sight is one piece with the slide and the same stainless-steel color, while the rear sight is painted black. They’re not as good as pistol red-dot sights, but still get the job done well.

The single-action-only trigger also increases your accuracy. In the newer versions, the old plastic trigger has been replaced with a serrated, anodized, solid aluminum trigger. It breaks crisply at just around six pounds with very little take-up and overtravel, as well as a quick reset. The trigger system as a whole is very well-engineered.

There’s also a manual thumb safety, which is easy to turn off but kind of awkward to re-engage. The size and position make it hard to use unless your hand is in just the right position, and people with large hands might find it even more difficult to use.

Unlike most .380 pistols, the Mustang fires from a locked breech instead of straight blowback. It’s easy to use and about as reliable as you can expect. Throughout hundreds of rounds, I’ve never had any issues with cycling or shooting.

The Mustang has a 6+1 capacity and comes with two stainless steel mags that fit flush with the frame. It doesn’t use a magazine disconnect, which means it’ll still fire the chambered round without the mag attached. To make it safe, you’ll need to fully remove the magazine and empty the chamber.

The Colt Mustang retails for around $650, which seems to be a reasonable price for what you get. It’s a little more expensive than the Walther P99, but offers much better recoil management at a lower weight. While you won’t get great long-distance accuracy with the Mustang, it is a very easily concealable pocket gun that works great for self-defense purposes and looks great!