The U.S. Air Force Has Doubts About the F-35 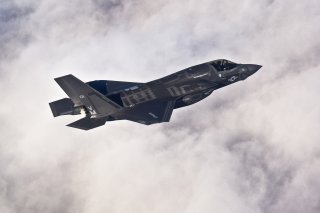 Here's What You Need to Remember: While the result is a highly capable aircraft that can engage targets from over the horizon and even make older jets in its vicinity more deadly, the F-35 has been seen as a failure by critics who point to it as an example of government acquisition gone awry.

The U.S. Air Force is thinking about starting from scratch on a new, lightweight fighter that could ease the financial burden brought on by the troubled but capable F-35.

The F-35 Joint Strike Fighter may be the Air Force’s “quarterback in the sky,” but it’s also expensive to operate and, to date, still riddled with issues. Now, the Air Force is kicking off a month-long assessment of the branch’s tactical aviation requirements with the intention of potentially fielding an all-new fighter that boasts some of the capabilities found in the F-35 and F-22, but with a significantly smaller price tag. This new fighter would not replace the F-35, but would instead be used in place of 4th generation fighters like the F-16 Fighting Falcon.

“I want to moderate how much we’re using those aircraft,” Air Force Chief of Staff Gen. Charles Q. Brown Jr. said of the F-35 last week.

Despite the polite language, this subtle statement is a bit of a bombshell. For years now, the Pentagon and Lockheed Martin have touted the incredible capability of the F-35 despite its setbacks. The aircraft is expected to replace the F-16 as America’s workhorse fighter, with the U.S. planning to order more than two thousand of them before its production run is complete… But developmental problems and cost overruns have prompted a chorus of critics who say America’s fighter of the future is more about politics than capability.

The Air Force has already begun purchasing a slew of new old fighters in the 4th generation F-15EX, which will replace aging F-15 Eagles in the branch’s inventory. Some have suggested doing something similar with the F-16; purchasing updated iterations of the famed fighter to fill roles that don’t require a stealth aircraft. Brown, however, dismissed that idea–saying instead that a new fighter needs to be developed that leverages some 5th generation capabilities, but comes in a simpler, cheaper package.

The F-22 Raptor was the world’s first operational stealth fighter, and introduced the world to what we’ve come to know as the 5th generation of fighter aircraft. Initially, the Air Force intended to purchase 750 Raptors to replace its fleet of F-15 Eagles as America’s premier air superiority fighters, but decades-long conflicts in the Middle East ultimately prompted the program’s cancelation. After delivering just 186 F-22s to the Air Force, Lockheed Martin would go on to cannibalize the supply chain and facilities once dedicated to the Raptor to their next high-profile stealth aircraft, the F-35.

However, 14 years after the F-35 first took to the sky, it has still not been authorized to move into full-rate production thanks to a litany of bugs and issues that have plagued the aircraft program since its inception. In fairness to Lockheed Martin, the defense contractor leading the F-35 program, the aircraft itself was truly without precedent when development started.

Like the F-22, stealth was an intrinsic part of the F-35’s design, but the aircraft surpasses its Raptor sibling in the realm of data fusion and pilot awareness. The F-35 can take data feeds from sensors all around it, including land-based assets, ships, or drones, and blend all of the information with its own suite of on-board sensors. The result is a single, streamlined view of the battlespace that pilots can access directly through their heads-up displays and augmented reality headsets. Pilots can even look directly through the bottom of their aircraft using the F-35’s pilot display and on-board cameras while flying at night. Some have gone so far as to describe the F-35’s “God’s eye view” as similar to using cheat codes on a video game when compared to its 4th generation predecessors.

While the result is a highly capable aircraft that can engage targets from over the horizon and even make older jets in its vicinity more deadly, the F-35 has been seen as a failure by critics who point to it as an example of government acquisition gone awry.

The Joint Strike Fighter program originally aimed to save money by fielding a single new fighter that could meet the needs of the Air Force, Navy, Marines, and foreign allies. Lockheed Martin’s X-35 ultimately won out over Boeing’s X-32 for the contract, and almost immediately thereafter, issues began to surface. The new F-35 would be split into three trims: The F-35A would be used with traditional runways for the Air Force and many foreign allies, the F-35B would offer short-take off and vertical landing capabilities for the Marine Corps, and the F-35C would come with broader, foldable wings, reinforced landing gear, and a tail hook for operating off of the Navy’s carriers.

However, after designing the F-35A, Lockheed Martin’s engineers realized that converting that design for the F-35B would end up making the fighter more than 3,000 pounds too heavy. Solving this quagmire delayed the program by 18 months and added a sizeable $6.2 billion to the program’s price tag. It would be the first of many problems to arise along the F-35’s path to combat operations.

Today, the F-35 is closer to what was originally envisioned than ever before, despite a notable list of issues that remain unaddressed. The aircraft truly is a force of military-aviation nature when in the fight according to pilots who participate in large-scale war games… but the high costs associated with the F-35 don’t stop at the factory.

Even with all of the F-35’s headaches addressed, one more looming problem remains–the price of operating the aircraft. Thanks to state-of-the-art stealth technology and radar-absorbent coating that needs frequent touch-ups, the F-35 costs around $44,000 per hour of flight. Compare that to the expected $20,000 per hour for the F-15EX, and you start to realize just how pricey the Joint Strike Fighter really is. With an operational lifespan of around 8,000 hours (compared to 20,000 in the F-15EX) and the figures climb ever higher–as it will take more aircraft to fly the same number of hours when using an F-35 instead of an advanced 4th-gen jet like the Eagle.

Put simply, the F-35 may be incredibly capable… but it’s also incredibly pricey. For many of the combat operations America conducts, the F-35’s advanced capabilities really aren’t all that necessary. As General Brown said, it’s like driving your Ferrari to work every day. You can do it… but it doesn’t make a ton of sense.

Could a new fighter solve these problems?

The billion-dollar question here is really whether or not developing another new fighter could result in an overall reduction in cost without creating a reduction in capability. It seems feasible that firms like Lockheed Martin and Northrop Grumman, who are both currently responsible for stealth aircraft in America’s stable, are better suited now for the challenge of developing an economical stealth fighter than at any time in the past. The F-22 Raptor began production in 1996 and the F-35 started ten years later in 2006. With more than a quarter-century of trial and error under their belts, building a new fighter wouldn’t be as uphill a climb as the previous efforts were.

The acquisition process could also be significantly improved. Many of the most prominent issues the F-35 faces come as a result of the Pentagon’s decision to begin procuring F-35s before testing was complete. That led to many aircraft being delivered that are not at all combat-ready, forcing the force to choose between allocating funds for new F-35s, or for fixing their old ones.

It seems all but certain that new fighter acquisition would not seek to mash the needs of multiple forces into a single fuselage, and further, that the firm developing and building the aircraft would be more accountable for how they spend. Boeing has already begun courting Pentagon contracts with the F-35’s debacle in mind, often offering fixed-rate contracts that would see the firm owning extra unforeseen costs, rather than the taxpayer.

And to be clear, even Lockheed Martin has advertised that they could build a better jet for less. In 2018, they proposed a new aircraft to the Japanese Self Defense Force that would couple the strengths of both the F-22 and F-35 for a smaller price tag than either.