The U.S. Air Force's New ICBM May Be Ready Sooner Than Expected 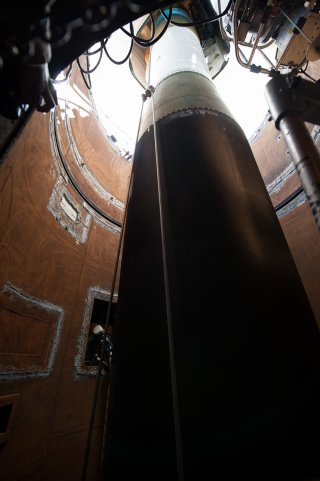 Here's What You Need to Remember: With specific regard to the GBSD, as far back as several years ago, former Air Force Acquisition Executive Will Roper explained that digital engineering technologies enabled service weapons developers to analyze as many as ten different designs before making a decision, without having to actually spend years building them.

Could the Air Force’s new Intercontinental Ballistic Missile (ICBM) arrive as soon as 2026? Several years earlier than may have previously been projected? Maybe, according to an Air Force report citing senior service weapons developers emphasizing the need for the emerging Ground-Based Strategic Deterrent (GBSD) ICBM.

The Northrop Grumman program, now under contract and on track, had been slated to appear on the operational scene by the end of the decade, but now it may arrive earlier.

"We're looking at GBSD starting in '26, finishing in '36. Cheyenne (Wyoming) will be first, Malmstrom (Air Force Base) will be second, and Minot (AFB) will be third. That is going to have to move forward because that is critically important for the country’s defense," Sen. Jon Tester (D-MT) Chairman of the Senate Appropriations Subcommittee on Defense, said in an Air Force report.

Tester accompanied Air Force Chief of Staff Gen. Charles Brown on a visit to Malmstrom Air Force Base to assess the installation and discuss force modernization. Naturally, given the role, this part of the U.S. plays in strategic nuclear defense, with ICBM silos spread across Montana, Wyoming, and North Dakota, nuclear weapons modernization was also a key point of emphasis.

“A safe, secure, and reliable nuclear deterrent allows the nation to negotiate from a position of power, provides the United States and our allies with an umbrella of protection, and discourages aggression worldwide,” Brown said. “The advantage of global strike provides a critical backstop for our diplomats and reassurance to our allies and partners. Regardless of the aircraft, weapon, or system, we must modernize in order to maintain our strike capability… anytime, anywhere.”

While the Air Force continues to make vigorous efforts to sustain, upgrade and test the 1960s-era Minuteman III ICBMs to bridge the gap until GBSD arrives, there has been growing concern about the age and obsolescence of the Minuteman III for many years, so it is no surprise that a new ICBM has been on the fast track.

How could it be early, given the complexity of engineering a weapons systems of this importance which, according to service developers, needs to be built for growth with technical standards allowing for continued upgrades as threats change?  Despite the surprise or potential early arrival of a weapons system of this kind, there are reasons why it actually might not be that surprising. GBSD has been one of the first programs to employ digital engineering developmental methods. The process, which draws upon advanced computer simulations to approximate, and even replicate, weapons systems designs and performance, continues to yield promising results for the Air Force. It is believed that digital engineering may be one reason why the Air Force’s 6th-Generation aircraft has already taken to the skies, years ahead of schedule.

With specific regard to the GBSD, as far back as several years ago, former Air Force Acquisition Executive Will Roper explained that digital engineering technologies enabled service weapons developers to analyze as many as ten different designs before making a decision, without having to actually spend years building them. Digital engineering has become so precise that specifics related to technical performance of weapons systems, aerodynamics, range, and targeting can all be replicated with great accuracy, a circumstance that massively expedites the developmental process.

Therefore, perhaps in a manner somewhat analogous to the new 6th-Generation aircraft program, the new GBSD will explode onto the scene years earlier than expected.