The U.S. Army’s Next Generation Squad Weapon Will Be a Killer 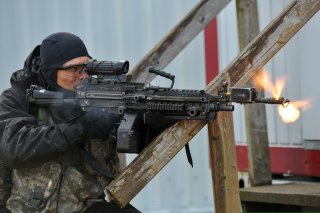 The U.S. Army’s ambitious Next Generation Squad Weapon, intended to be a catch-all replacement for the iconic M16, M4 carbine, and M249 Squad Automatic Weapon. There are currently three firms in the running, and have offered fairly different platforms — and testing is now in its final phase.

All three of the contenders are built around the 6.8mm Special Purpose Cartridge, a government-designed medium-caliber rifle cartridge that falls in-between the 7.62mm and 5.56mm NATO cartridges in terms of bullet diameter. Though the actual bullet is mandated, what the cartridge looks like is up to the individual NGSW entrants. One thing that all three firms’ entrants have in common, however, is a removable suppressor.

Next Generation Squad Weapon: Who Is In the Running?

The Defense firm General Dynamics’ offering is perhaps the most radical of the three. Their bullpup design sees magazines loaded behind the trigger group, offering a longer barrel length — and therefore higher muzzle velocities and increased maximum effective range — while maintaining a very compact overall length.

General Dynamics partnered with True Velocity to develop what they think could be the next revolution in ammunition. A Texas-based polymer ammunition manufacturer, TV’s ammunition is radical — by exchanging brass ammunition casings for plastic, TV claims that significant weight savings can be gleaned, and therefore allow grunts to hump more ammunition around.

Sig Sauer’s entry is perhaps one of the more conventional of the three competing designs. A conventional, non-bullpup layout is completed by hybrid ammunition. By using a steel base and polymer cartridge body, Sig Sauer claims that sufficient weight reduction can be made with sufficient case strength to handle the 6.8 SPC’s increased chamber pressure.

On the other hand, Textron’s ammunition is the most bizzare-looking — they decided to design their platform around telescopic ammunition, wherein the entire bullet and propellant are encased within the cartridge case, offering a more compact, lighter cartridge. Though on paper there are significant gains to be made with such ammunition, the technology is extremely green and untested.

It’s not just the U.S. Army that is going through a small-arms evolution. The U.S. Marine Corps has also fairly recently forgone their M16 rifles and M4 carbines in favor of the M27 rifle, which is still being rolled out. However, new isn’t always better.

The supposed weight savings touted by the Army by using plastic casing rather than brass may not be as great as they seem. Individual soldiers don’t always carry enough ammunition to take full benefit of a reduction in ammunition weight — the greatest benefit would be logistically, to the ships, planes, and trucks that move large quantities of ammunition, not to the individual soldier.

Furthermore, using plastic cases could come at an inopportune time. Dr. Allan Orr, a Sydney-based anti-terrorism specialist explained just why the Army’s new ammunition might not be the best idea, explaining that “the Great Pacific garbage patch over the next 50 years will only increase at a time when the world is trying to get on top of it.” This has also led to some speculation that light-weight plastic ammunition could be a hard sell for European NATO Allies, due to potential difficulties in getting more environmentally-friendly countries onboard with plastic NATO-standard ammunition.

All three contenders have two versions of their weapon systems in the running: 15 rifles and 15 automatic rifles plus 180,000 rounds of their own cartridges. The various platforms are currently being tested and evaluated by U.S. Army soldiers. There should soon be a winner.