U.S. Army Brought in Soldiers from Germany to Test a New Anti-Aircraft System 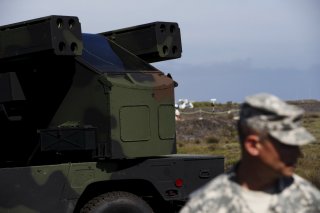 Here's What You Need to Remember: It has also been noted that an entire unit was brought in from Germany to conduct the testing. The reasoning was that the 5th Battalion, 4th Air Defense Artillery Regiment has already been equipped with the Avenger system that the IM-SHORAD system will eventually replace. This allows for the soldiers who will use it to provide their feedback during the crucial testing period, while they'll also be trained and ready to use it when it is deployed.

Earlier this month soldiers from the United States Army’s 5th Battalion, 4th Air Defense Artillery Regiment out of Ansbach, Germany headed to the White Sands Missile Range (WSMR) in New Mexico to put the latest air defense system through its paces. The facility was used for conducting training and operational testing of the Army's Initial Maneuver Short Range Air Defense (IM-SHORAD) system, which is one of the Army's newest platforms to replace the aging Avenger short-range air defense systems.

The Army has noted that while the AN/TWQ-1 worked well in the Cold War, the system has shown its age and is reportedly less survivable than other modern air defense systems. It also required a long set up time to make it operational.

To that end, the IM-SHORAD is its successor and was developed to bring a modernized package of capabilities to mobile ground units. The IM-SHORAD can be mounted on a Stryker armored vehicle to provide protection to an entire unit. According to the U.S. Army, the system features its own radar and offers an array of weapons that can prove effective against air threats without the long setup process of the Avenger.

“There's a lot of equipment on this machine that will change a lot of aspects for the Air Defense Artillery,” said Spc. Andy Mendoza, an air and missile defense crewmember with the 5-4 ADA. “Everything from operations to capabilities to new weapons we as ADA don't have currently, and I think it will make a huge difference to what we do.”

To date, multiple prototypes of the platform have to be produced for operation testing before the IM-SHORAD will enter full production. Currently, soldiers are now learning to use it, and this includes a mix of trial and error.

“It's easy to get caught up in what you are doing, how you're designing it and how you're explaining it to yourself,” said Steven Powell, acquisition logistics lead with the IM-SHORAD Program Office. “Everything might look good on paper, on the board, but until we get through the testing and putting it through its paces, understanding what it's actually capable of, we won’t know if we're producing the right system for the Soldier.”

To date the soldiers have been reportedly impressed with the system, and this includes not only the weapon platform but the vehicle, which has been described as bigger, stronger and a lot heavier—making it more than up to the task.

It has also been noted that an entire unit was brought in from Germany to conduct the testing. The reasoning was that the 5th Battalion, 4th Air Defense Artillery Regiment has already been equipped with the Avenger system that the IM-SHORAD system will eventually replace. This allows for the soldiers who will use it to provide their feedback during the crucial testing period, while they'll also be trained and ready to use it when it is deployed. The 5-4 ADA will be the "core cadre" of soldiers fully trained on the system and familiar with not only its abilities and unique features but also any quirks the platform presents.

“The reason why this platoon is out here from Germany is we'll be fielding the first system into the Army, so it not only gets us to test the system, but also understand how to use it so we can go back to our home unit and train with them on the system,” added 1st Lt. Ryan Pitcher, the units' platoon leader.

It also provided the 5-4 ADA to get to test the system on the historic WSMR, which is the Department of Defense's (DoD’s) largest, fully-instrumented, open-air range. It was established as the White Sands Proving Ground in July 1945 and the first atomic bomb, code named Trinity, was test detonated near the northern boundary of the range just seven days after the proving ground was established.