The U.S. Army Could Learn from the Navy's Submarines 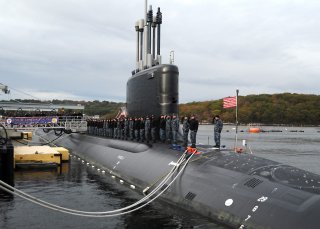 Here's What You Need to Remember: In creating its modernization command, the Army would benefit from closely studying the way the Navy’s Virginia class attack submarine (SSN) program. The Navy has created a process that provides for continual upgrades to new boats while reducing costs and almost always keeping to the planned production schedule.

Like Moses and Aaron, the Army’s Chief of Staff, General Mark Miley, and its Acting Secretary, Ryan McCarthy, have decided it is time to lead their service out of bondage from a dysfunctional acquisition system. Milley and McCarthy’s vision of the Promised Land doesn’t contain milk and honey. Instead, it is a place where the Army will be able to develop and deploy new advanced military capabilities at a faster pace and for lower costs than was previously possible.

The Army’s two top leaders do not plan this exodus to last forty years. Instead, the journey will take less than one. The first step forward, announced in early October, is the creation of cross-functional teams (CFTs) tasked to generate requirements for capabilities in six modernization priority areas. It is hoped that by bringing together experts in all the key disciplines, the CFTs can overcome the impediments to fast and cost-effective acquisition inherent in the traditional system. The CFTs will perform detailed system engineering studies, conduct trade-off analyses, conduct experiments and even develop prototypes when necessary. The CFTs are supposed to develop realistic requirements and a set of capabilities documents that will drive the efforts to deliver better military platforms and systems that are faster and cheaper.

Standing up the CFTs is only the first step on the journey through the desert. Milley and McCarthy say they want to stand up a new modernization command by mid-2018. While there are few specifics yet available regarding the new command’s charter, structure, manning or resources, the Acting Secretary declared that its scope "will extend from idea to delivery" of the gear and tools the Army will ultimately need to modernize.

While it is a critical first step in the development of a new platform or system, the requirements process is not where most of the delays and cost increases occur. Problems tend to multiply in the remaining stages of the acquisition process as requirements are translated into engineering designs, creating prototypes or test articles, pursuing system integration, demonstrating producibility, testing performance and, finally, delivering products. Even if the time it takes to generate requirements is cut in half, these savings could be negated by schedule slippage in any of the successive phases of the acquisition process.

The Army’s modernization process needs even greater changes than those proposed by General Milley and Acting Secretary McCarthy. It requires a profound mental shift. As the Army has shown through repeated acquisition program failures over the past two decades, it is impossible to define with specificity the requirements for a new platform or system that will be in service for three or more decades. Attempts to do so have usually resulted in requirements that are unattainable based on the state of technology in a program’s early years, undesirable because of the changing character of threats or irrelevant due to advances in technology that render the requirements obsolete.

The new modernization command needs a new way of thinking about creating and sustaining new capabilities. Modernization priorities should be addressed as processes, not platforms or systems. The Army will be continually upgrading these priority capabilities throughout their service lives. Modernization of the basic structure of the desired capability, be it a platform, complex system, network or even architecture, should be driven by their role as a “vessel.” It has basic characteristics concerning size, weight, volume, speed, power and survivability. Because basic structures change relatively slowly, they must be designed with continual upgrades in mind. Into the “vessels” the Army should pour the fruits of both government and private research and development efforts as rapidly as they can be developed or as resources are made available.

The pace of change in the systems, sub-systems and components that enable a major capability to function and perform its missions is much faster than that of a platform or even a network. Therefore, this is where the focus on future modernization must be. The new command should create permanent CFTs that can oversee the insertion of new technologies for the service life of a major capability while also pursuing cost reductions through manufacturing improvements. Because there will be no end to the opportunity technology insertion provides there is no need to delay a major procurement by waiting for a better idea to emerge.

In creating its modernization command, the Army would benefit from closely studying the way the Navy’s Virginia class attack submarine (SSN) program. The Navy has created a process that provides for continual upgrades to new boats while reducing costs and almost always keeping to the planned production schedule. Even in its initial incarnation, the Virginia-class was state-of-the-art with superb quieting through the use of, among other technologies, pump-jet propulsors, a fly-by-wire ship control system, photonic masts with multiple sensors instead of the traditional hull-penetrating periscopes and a new battle management, command, control and communications architecture. The program also focused on reducing the cost of each boat through major innovations in computer-aided design, modular construction techniques and the use of new materials and processes to manufacture components.

The program’s most significant acquisition process reform was the decision to acquire the Virginia class boats in a series of block buys and to freeze the technology upgrades to be included in each block. This allowed for early procurement of long-lead items, the use of economic ordering quantities and the avoidance of scheduling issues and cost problems associated with engineering change orders. Block III sees the redesign of the boat’s bow, the replacement eight vertical launch tubes with two larger multi-use improved payload launch tubes and the introduction of a new, more capable and less costly sonar system. Block V boats will be the first to carry the Virginia Payload Module, four large vertical launch tubes each capable of carrying multiple cruise missiles or a single large payload.

The Virginia class program has been so successful that the Navy is considering speeding up the introduction of critical new capabilities. The Navy’s Undersea Warfare Directorate has produced a Tactical Submarine Evolution Plan that, among other elements, proposes rapid technological insertion mid-Block on a two-year cycle. The analogy used is of a continuing conveyer belt. If a technology or system is ready within two years, it is in; otherwise, it goes around again with possible insertion two years later.

The Army can transform its acquisition system. But to do so, it needs to think big, act boldly and go fast.

This first appeared in RealClearDefense here in 2017 and is being reprinted for reader interest.