The U.S. Army Wanted This Sci-Fi Looking Rifle To Be The Future (It Failed) 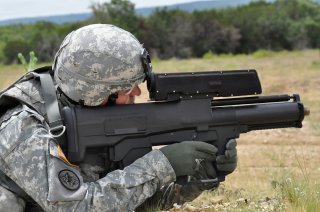 Here's What You Need To Remember: The grenade launcher used ballistic computer and rangefinder technology to pre-set the grenades to explode above or next to targets, allowing the shooter to engage concealed targets. Warhead options included high-explosive and fragmentation.