The U.S. Army's New Assault Rifle Shoots Bullets With the Force of a Tank? 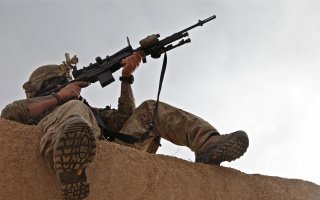 Key Point: The service is working overtime to get the muscular system operational.

The service plans on fielding a Next Generation Squad Automatic Rifle (NGSAR) — the first version in the Army’s Next-Generation Weapons System that chambers a round between 6.5mm and 6.8mm —  as a potential replacement for its 80,000 M249 SAWs starting in fiscal 2022 rather than the original target date of fiscal 2025, Col. Geoffrey A. Norman, force development division chief at Army HQ, told Task & Purpose back in 2018, with two per nine-man infantry squad.