The U.S. Army's Pegasus III Drone Could Be a Game-Changer 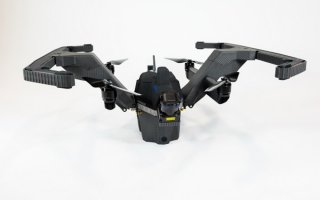 Here's What You Need to Know: The Pegasus III is part of a family of autonomous vehicles.

To this day the mythical winged divine horse Pegasus remains one of the most recognized creatures from Greek mythology. It was noted for being able to run on land at high speeds or even fly in the air—so it is fitting that the Robotic Research dubbed its transformable unmanned aerial system (UAS)/unmanned ground vehicle (UGV) system the Pegasus III.

The tactically deployable, transformable autonomous robot system was first unveiled at the AUVSI Unmanned Systems-Defense, Protection, Security Conference in Washington, D.C. in August 2019. Since that time, development and testing have continued. Robotic Research conducted a test of the platform during the Project Convergence capstone event that was held at the U.S. Army’s Yuma Proving Ground (YGA), Arizona in September 2020.

A variety of equipment was demonstrated during the event, which demonstrated the U.S. Army’s multi-domain operations (MDO) warfighting concept, and Gen. James McConville, Army Chief of Staff said that Project Convergence was a “major step forward in transforming the United States Army for the next 40 years.”

More Than Meets The Eye

During Project Convergence this wingless Pegasus III was able to take flight as a UAS, but then transform to a ground-roving tracked vehicle where it could take part in simple surveillance operations or be deployed to create detailed 3D maps. It is equipped with artificial intelligence (AI), which allows the vehicle to avoid obstacles while on the move.

It is thus akin to an eye in the sky and a mapping tool on the ground.

The small drone, which can carry approximately ten pounds of cargo, utilizes four rotors to fly while thin rails with integrated tracks enable it to move across the ground. The tracks also serve as propeller guards during the transition from ground to air mode.

The Pegasus III can take part in ground operations for up to four hours, but flight-only missions are currently limited to around twenty minutes Defence-Blog reported.

While the military has been reportedly focused on the Pegasus III, it is actually part of a family of autonomous vehicles that also include the Pegasus Mini, a football-sized transformable drone that was first demonstrated at this past January’s CES 2020 consumer electronics trade show in Las Vegas.

The basic components of the unmanned platform include multiple cameras and an encrypted datalink that provides communication back to an operator. The robot also features a unique GPS-denied functionality, which enables it to perform missions individually or even as part of a group. This could include other Pegasus units, as well as other manned and unmanned ground units, and dismounted infantry.

The Pegasus units can be controlled by a pocket universal controller kit (PUCK), which can transmit autonomous missions to multiple Pegasus systems simultaneously. The PUCK controller is installed with the commercial off-the-shelf (COTS) components.