The U.S. F-35 Had A Rough Start, But There Is A Reason Our Adversaries Hate It 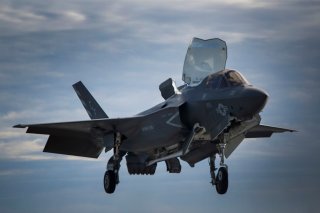 Here's What You Need To Remember: The F-35 has been a troubled program, technically and financially, and, as suggested above, it is not a silver bullet.  However, it remains one of the few bullets available, and one our potential adversaries worry about quite a bit.

Back in November 2008, just after the election that brought Barack Obama to the White House, then-Secretary of Defense Robert Gates made what was arguably the worst decision of his long career, pulling his backing from the Air Force’s top-line fighter procurement, the F-22 Raptor.  That summer, he had fired both the Air Force’s civilian secretary and its chief of staff, a move in which disagreement about the F-22 played a large role.  At the peak of involvement in Iraq, Gates — reflecting the consensus of conventional wisdom at the time — believed a large fleet of air superiority fighters was no longer “relevant” to US strategy.  He stayed on through much of Obama’s first term, helping to further define down defense requirements and see the F-22 to its grave.

The termination of the F-22 program at just 187 airplanes has compelled not only the Air Force, but the Navy, Marine Corps, and the majority of America’s useful allies, particularly in East Asia, to place all their tactical aircraft eggs in one basket, that of the F-35 Lightning.  This had resulted in very serious consequences, indeed: despite both being “fifth generation” fighters, the two planes are fundamentally different.  Demanding that the smaller F-35 play a much larger role in emerging concepts of air campaigning has introduced risks of many kinds: technological, programmatic, operational, and, increasingly, strategic.

The revolutionary element in both programs was to make “stealthy” — that is, difficult to detect by the radars in use by most potential adversaries — aircraft the basis of US and allied air fleets, not just an “enabler” of traditional fighter and strike aircraft, like the F-117, or a “pinprick” conventional capability, like the tiny fleet of B-2 bombers.  Originally, the plan called for 750 F-22s and perhaps as many as 4,500 F-35s, if total allied complements were counted.  It was also thought to be important to field these fleets rapidly, building the F-35, in particular, by means of “concurrent” development.  In his 1996 report to Congress, then-Defense Secretary William Perry promised that, by 2010, the F-35 (then known as the Joint Strike Fighter) would begin to replace “all F-16” and other “fourth generation” tactical aircraft.  By such means would the United States retain the deterrent value of the kind of “shock and awe” of the 1991 Desert Storm air campaign, and forestall a quick return to great-power, Cold-War-style military competition.

The cancelation of the F-22 program knocked out a principal element of this plan.  Reduced defense budgets — Perry’s forecast was premised on halting the slide in post-Cold-War defense spending — have further weakened it.  And it is unclear how the misshapen force that is programmed — 3,000 or so F-35s but still just 187 F-22s — would fare in a tough fight.  But, incessant calls for defense “transformation” notwithstanding, there is no practical alternative.  The Air Force has started dreaming about a “sixth generation” fighter.  And now, at the moment when the F-35 purchase price has at last fallen to less than $80 million per plane, making it less expensive than a new F-16, it appears that Congress — or at least House Democrats — entertains the notion of scrapping the whole concept.

At a show trial — er, hearing — last week of the House Armed Services Subcommittee on Readiness and Tactical Air and Land Forces, panel chairman Rep. John Garamendi threatened to hold up the Pentagon’s just-negotiated long-term contract with F-35 prime maker Lockheed Martin.  As usual when it comes to new weapons issues, the chairman relied heavily on testimony from the Defense Department’s “independent” operational test office and the General Accountability Office in making his threat.  The test office has never met a program of which it approved — other than the original, plain vanilla version of the F-16 — and its understanding of modern, information-based systems and high-technology operations has often proved wanting.  The GAO has made headlines by repeating its finding that F-35 “life-cycle” costs will “exceed $1 trillion,” failing to mention that the figure is derived from an aircraft life-span of 60 years.  That’s up there with the venerable B-52 bomber — for a fleet of aircraft perhaps 20 times the size.  It’s also the cost of about 4 months of “Medicare for All.”  Properly regarded, the F-35 is kind of a bargain.

But the cost in budgetary terms is secondary to the cost of crippling US air power — still the distinctive “American way of war.”  The F-35 has been a troubled program, technically and financially, and, as suggested above, it is not a silver bullet.  However, it remains one of the few bullets available, and one our potential adversaries worry about quite a bit: China, Russia, and others — Iran, for example — have invested many trillions in creating “anti-access” and “area-denial” capabilities and capacities in response to the many demonstrations of stealthy-aircraft-led campaigns over the last 30 years.

That’s a good thing, or at least a better thing than having them develop their own power-projection forces to shock and awe our allies and ourselves.  That day is coming, if it isn’t already here.  It’s past time to stop worrying and learn to love the F-35.