The U.S. Military’s Ultimate Nightmare: An Invasion of North Korea 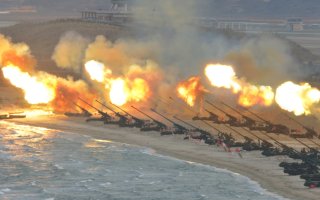 Here's What You Need to Know: A ground war with North Korea would be an extremely complex operation with considerable military and civilian casualties on both sides.

Image: Artillery pieces are seen being fired during a military drill at an unknown location, in this undated photo released by North Korea's Korean Central News Agency (KCNA) on March 25, 2016. REUTERS/KCNA/File Photo