The U.S. Military Has Little to Fear From Iranian Arms Purchases 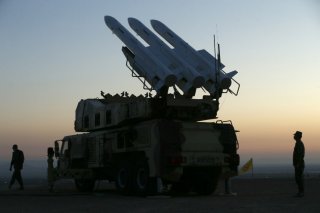 Here's What You Need to Remember: While Iran’s rulers have no aspirations to be a superpower, they do seem to covet being a regional hegemon as the Persian Empire was. So far, Iran has waged war on the cheap by using proxies rather than massive troop commitments as the U.S. did in Vietnam, Iraq and Afghanistan. But as Hezbollah has discovered when its Iranian subsidies were slashed, even war on the cheap can be expensive.

That means more ballistic missiles to hit its enemies, as well as mines and other naval weapons to close the Persian Gulf to oil tankers, according to a new report on Iranian military power by the Defense Intelligence Agency, the Pentagon’s pet spy service.

But the question is whether Tehran can afford to develop these capabilities.

DIA expects that Iran will continue to use unconventional means such as terrorism, or supporting proxies such as Hezbollah to do the dirty work against perceived enemies such as the United States, Israel and Saudi Arabia. But it is also determined to build up capabilities in more conventional arms.

“Recognizing its inability to defeat an advanced Western military, such as the United States, Iran in the near term probably will continue to emphasize its three core capabilities: ballistic missiles capable of striking targets throughout the region, littoral naval forces capable of threatening navigation in the Persian Gulf and Strait of Hormuz, and support for partners and proxies capable of unconventional operations abroad,” DIA predicts.

“Tehran will improve its conventional forces and seek new capabilities. Iran’s latest 5-year development plan continues priority for missiles, naval forces, and air defenses, but it also adds new emphasis on combat air power and EW capabilities. Iran probably will continue to focus on domestic development of increasingly capable missiles, naval platforms and weapons, and air defenses, while it attempts to upgrade some of its deteriorating air and ground capabilities primarily through foreign purchases.”

Yet Pentagon analysts also point out the price tag for this ambitious program may be too high.

“Despite these goals, ongoing financial constraints and sanctions will challenge Iran’s military modernization efforts,” DIA says. “Tehran will be unable to meet all of its acquisition priorities and requirements in this environment. The complex security situation of the Middle East—with the continued presence of U.S. forces, the superior force projection capabilities of Israel, and the growing military means of Saudi Arabia and the Gulf states—will further complicate Iran’s efforts to build its conventional force.”

The report, dated as of August 2019, does not include the September 2019 attack on Saudi oil facilities by a massed salvo of drones and low-flying cruise missiles. Ostensibly launched by Iran’s Houthi allies in Yemen, though very likely with Iranian participation, the strike damaged oil installations despite Saudi Arabia’s six battalions of U.S.-made Patriot air defense missiles. And in June 2019, an Iranian surface-to-air missile downed a high-flying U.S. Global Hawk surveillance drone. The Saudis – and the Israelis and Americans – have not failed to take note of Iran’s missile drone capabilities.

On the other hand, the DIA report also does not mention the domestic turmoil currently sweeping Iran since November 2019. Hikes in state-subsidized gas prices triggered protests in numerous Iranian cities. Protesters also are questioning why the government is funding Hezbollah in Lebanon, Houthis in Yemen, Islamic Jihad in Gaza, and propping up the Syrian government, even as U.S. economic sanctions have bit deeply into the standard of living of ordinary Iranians.

Which raises the question of whether Iran will turn out to be another Soviet Union, which drove itself into collapse by waging a costly arms race with the United States. While Iran’s rulers have no aspirations to be a superpower, they do seem to covet being a regional hegemon as the Persian Empire was. So far, Iran has waged war on the cheap by using proxies rather than massive troop commitments as the U.S. did in Vietnam, Iraq and Afghanistan. But as Hezbollah has discovered when its Iranian subsidies were slashed, even war on the cheap can be expensive.

Michael Peck is a contributing writer for the National Interest. He can be found on Twitter and Facebook. This piece was originally featured in November 2019 and is being republished due to reader interest.