The U.S. Military Needs Speed to Win a War Against China 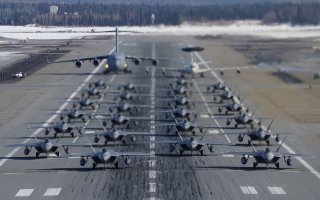 Here's What You Need to Know: The U.S. military wants to find, track and destroy enemy targets across unprecedented ranges.

Success in massive, great power, multi-domain war may in coming years come down to a simple word. Speed.

While of course seemingly reductive to a degree, the force with an ability to process, share and decisively act upon key, time-sensitive target data and warfare information, is certainly likely to prevail. If an approaching mechanized armored force is able to receive information on enemy force activity and location from satellites, drones, aircraft or even Navy ships—and have the long-range precision weaponry to decisively strike—well before they are themselves able to be targeted, they are of course likely to prevail.

Future war, to a large extent, hinges upon information. Does this mean war will be won or lost by virtue of the efficacy of AI? That is certainly a key variable, yet the weapons themselves still need to be lethal, long-range, and effective against an array of complex targets.

Operating within this fundamental recognition, the Army is moving quickly to experiment with, test, refine and engineer new weapons, technologies, and tactical warfare applications. This concept is the basis of the Army’s upcoming multi-domain, multi-service Project Convergence 2021.

Robots, mini-air drones, surrogate armored combat vehicles, long-range missiles, cross-country satellite networking, and super high-speed, AI-enabled computing are all on their way to the desert later this year for this year’s Project Convergence.

The first one, wherein targeting decision loops were truncated from minutes to seconds, proved successful for many service leaders, technology experts, and weapons developers seeking to redefine how modern warfare is conducted. One could call it a kind of “warfare at speed” enabled almost entirely by multi-node combat sensor networking massively accelerated by an AI-capable computer called Firestorm. Not only will the upcoming Project Convergence 2021 involve other services to a much greater degree but will also incorporate multi-domain tasks forces, Air Force weapons, Navy technologies, and even a headquarters element which was not there last year.

“There will be mission threads just like last year, all tied to questions we are trying to answer, using the same level of data collection we used last year. We will go into this year with the other services all in on bringing their data collectors. It will be a pooled set of data. We will all have access to it so we all have the ability to learn the same things from the data,” Gen. John Murray, the commander of Army Futures Command, told the National Interest.

In a broad sense, it is interesting and significant to note that, with Project Convergence, the Army may be accomplishing or beginning to accomplish the kinds of AI-enabled, sensor-to-shooter breakthroughs truly able to reshape the paradigm for modern war. Murray, in fact, sees it this way and while he emphasizes that the process is experimental and very much a learning process, he does say Army thinkers are beginning conceptual work on how these technical and tactical adaptations will inform new doctrine.

This kind of real-time combat networking, particularly across domains, is something the Army has been working on for decades. Now, due to advances in technology and maneuver formation adaptations, it may be coming to fruition. Senior leaders are reluctant to draw any premature conclusions, yet they are optimistic and do seem to operate with the clear recognition that, should a major mechanized joint U.S. military force be able to find, track and destroy enemy targets across unprecedented ranges in an unprecedented multi-domain way exponentially faster than major power rivals, it could lead to a much sought after and needed advantages.