Is the U.S. Military Ready to Fight a New Kind of War? 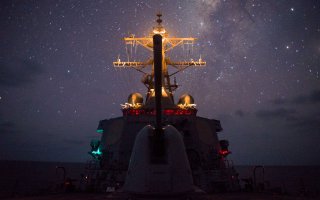 Here's What You Need to Know: New eletronic warfare applications could help defend against enemy attack.

For many years, there has been a growing chorus of senior military leaders and weapons developers saying that the military force which dominates the electromagnetic spectrum is the one who will prevail in future conflict.

The U.S. Navy is taking new steps to defend against an entirely new generation of advanced anti-ship missiles, drone attacks, and other kinds of incoming enemy fire by fast-tracking new EW applications able to merge intelligence information with electronic attack.

The Navy is working with Northrop Grumman to prepare for a new series of ground tests for the newest EW variant, engineered to combine offensive and defensive attacks as well as integrate with Information Operations to a much greater extent.

It’s called the Surface Electronic Warfare Improvement Program Block 3, a new EW system being prepared to deploy over the next few years on Navy DDG-51 Destroyers and possibly the services’ new Frigate warships as well.

The SEWIP Block 3 EW system uses a collection of 16 Active Electronically Scanned Arrays, or AESA’s, to emit groups of targeted, individually separated “pencil” beams. “One advantage of an AESA is that it can generate pencil beams as opposed to a transmission of wide overlapping beams,” Mike Meaney, Northrop vice president of Land and Maritime Sensors, told The National Interest in an interview last year. Interestingly, Meaney said that Block 3 SEWIP operates at much faster, “machine speeds” so that the missile is driven to “kill itself” while inbound to a target.

Narrowly focused EW beams introduce several significant tactical variables such as an ability to achieve precision effects such as an ability to streamline, tailor or “scale” an attack in proportion to a given threat. A tactical advantage of equal or greater consequence is the reality is the ability to emit a smaller, more linear or “less detectable” electromagnetic signature, something which can massively reduce any chance of being identified or found by enemy sensors.

Yet another way EW is advancing is through the use of software upgrades able to program the weapons to adjust to new threats and in some cases even rely upon AI-enabled computer programming to discern, deconflict or distinguish specific signals within the electromagnetic spectrum. One such system is Raytheon’s Electronic Warfare Planning Management Tool which seeks to align critical intelligence data with signature recognition and accurate identification of otherwise entangled, overlapping, or conflicting signals within the spectrum.