The U.S. Military's Big Fear: What if They Can't Stop Drone Attacks? 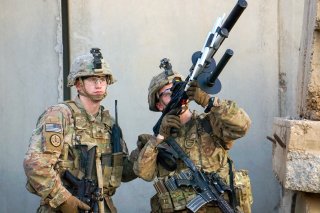 Here’s What You Need to Remember: When a Stryker gunner released the so-called “dead man’s” switch on the vehicle’s 30mm cannon, a slow-moving ground drone target exploded into a cloud of smoke and fire, marking a demonstration of a new counter-drone sensor-shooter technology now in development for Army consideration.

The four-foot drone, moving along a dusty test-firing range in Kingman, Arizona, appeared on the gunner’s “field of view” targeting screen able to calculate the precise location, distance and speed of the enemy drone target. The exercise was designed to assess an emerging counter-drone weapon system called Anti-Unmanned Systems Defeat (AUDS) by integrating the system onto a Stryker vehicle and attacking air and ground drones.

Attacking and destroying lower-flying small drones, ground robots or other kinds of unmanned threats is an emerging priority for the Army. This mission is quickly becoming more serious as small, swarming weaponized drones are more and more readily available on the international market. It is a challenge now taking center stage with Army weapons developers. For instance, the Army’s Rapid Equipping Force—a special unit tasked with fast-tracking proven weapons and technologies to soldiers at war -- is developing “drone buster” weapons engineered to find and destroy attacking drone swarms.

“We are assisting currently deployed fighting force to disrupt and deter drone operations on a much larger scale,” Col. Joe Bookard, Director of the Rapid Equipping Force, said in an interview with Warrior Maven.

The AUDS system, built by Northrop Grumman and several sub-contractors, is one of a number of technologies being looked at by Army to defend against small and medium-sized drone attacks. AUDS uses a vehicle-mounted mast equipped with antennas, sensors and electronic warfare weapons. The system uses software to “fuse” sensor input from radar and cameras or electro-optical sensors. Northrop integrated and demonstrated the AUDS system on a Stryker vehicle during its Bushmaster Users Conference in early April in Kingman, Ariz.

“I can look at where the AUDS system is pointing and I can also see where my gun is pointing,” Then, I release a switch and send a signal to the Remote Weapons System. I can release my dead man’s switch and cue the gun,” Willie Gabbard, Stryker gunner, Northrop Grumman.

The Stryker’s fire control system, which includes a Remote Weapons Station, targeting screen and manual controls, received the radar-camera fused information before tracking and “locking on” to the target.

“When we lase the target, it takes into consideration the distance and the environmental factors such as wind, pressure and elevation. Then, I hold the reticle on the target and take the shot,” Gabbard explained.

The target tracking, lock-on and fire functions are managed by a control stick and soft switches on the screen, allowing the gunner to slew the weapon onto the target. Inside the Stryker at the end of a row of black soldier seats, a TV-sized screen can show return images from radar “pings” sent from the mast, made by Northrop Subcontractor LITEYE. The location and speed info is then merged with camera systems intended to provide “very precise visuals.”

Overall, the AUDS system is able to use its suite of integrated sensors to merge a range of otherwise disparate sources of data, to include latitude, longitude, elevation, heading and speed.

AUDS is engineered to counter small and medium-sized ground and air drones, weapons that increasingly call upon new levels of autonomy and targeting to create complex attacks. The Army is already moving quickly on a Short Range Air and Missile Defense program built to fire Hellfire and Javelin missiles from Stryker vehicles to destroy air threats such as drones, helicopters or low-flying aircraft. AUDS is the kind of system which could potentially complement this system by adding an increased ability to track and destroy smaller, closer-in drone threats -- such as fast-approaching swarms.

Dispersed groups of attacking drone swarms present a number of complications for the attacked force, according to a 2017 essay from the Bulletin of Atomic Scientists. The essay, called The Upside and Downside of Swarming Drones, discusses some of the reasons why drone swarms are difficult to defend against.

This kind of threat scenario forms part of the essential basis for ongoing fast-tracked development of a new “proximity” round able to explode in a specific, pre-determined point in space to create a small “area” explosion. Certain small drones can hit speeds of 60-to-70 miles per hour, and some are small enough to fit in the palm of the hand. Swarms of these can be dispatched to blanket an area with ISR, build-in redundancy so a mission can continue if one is destroyed or even become explosives themselves programmed to detonate upon impact.

“The proximity round has a sensor inside, so once the round is fired it will be actively looking for targets. When it gets close enough it will explode. It is similar to how and airburst round would attack a swarm of drones, yet with more of a shotgun effect,” Jarod Krull, Communications Manager, Northrop Grumman, told Warrior in an interview. “When it gets close enough to the drone swarm, it will explode.”

AUDS is also configured to take out drone threats without firing a shot -- a so-called non-kinetic solution. The masts are equipped with EW technology to both sense and jam enemy electronics and communications systems. The system can work with several kinds of EW weapons; one is a Northrop EW weapon called Freedom which passively listens or waits to detect enemy electronic signals. This is important for strategic reasons as it can enable EW operations to be more stealthy, you might say. The moment a signal is emitted, an electronic signature is created, something which can be detected by an enemy. Passive EW weapons, therefore, are designed to operate without requiring the Stryker to give away its position, or at least become more detectable.

“Freedom is a tracking system will fuse that data to give you accurate info,” Krull added.

Passive EW sensors, Krull explained, would be of particular relevance in a major-power, high-end conflict where giving away a signal could pose serious risks.

“The Russians were able to find where radar energy is on the battlefield during their invasion of Ukraine,” Rob Menti, Business Development, Northrop Grumman, told Warrior during the AUDS demo in Ariz.

Other EW weapons are what can be described as “active,” meaning they also send an EW signal forward to both detect and destroy enemy electronic signals. This kind of EW system will not only detect the presence of electronic activity but also emit signals to disable them. This is the kind of weapon which could be used to track and jam an attacking group of drones or incoming missiles.

Bookard explained that using EW to attack enemy drones is a priority for the REF.

AUDS integrated EW weapons are able to detect the RF signature from a transmitter controlling an unmanned system or simply “ID the drone from those signals,” Ryan Carlson, Deputy Air Tech Director, Air Defense, LITEYE, a Northrop subcontractor working on the system.