The U.S. Navy’s Newest Aircraft May Be Fully Autonomous 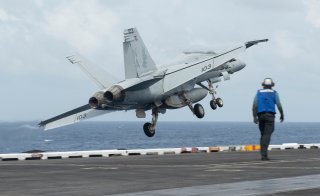 The Air Force too has been investing in unmanned combat aircraft. The unmanned “loyal wingman” drone is already being tested and in 2019 the service released its Artificial Intelligence Strategy arguing that “AI is a capability that will underpin our ability to compete, deter and win.” The service is also moving forward with testing their “Golden Horde,” an initiative to create a lethal swarm of autonomous drones.

The Marine Corps has also decided to bet heavily on an unmanned future. In the recently released Force Design 2030 Report, the Commandant of the Marine Corps calls for doubling the Corps’ unmanned squadrons. Marines are also designing unmanned ground vehicles that will be central to their new operating concept, Expeditionary Advanced Base Operations (EABO) and new, large unmanned aircraft. Department of the Navy leaders have said that they would not be surprised if as much as 50 percent of Marine Corps aviation is unmanned “relatively soon.” The Marine Corps is also investing in a new “family of systems” to meet its requirement for ship-launched drones. With so much investment in other unmanned and autonomous platforms, why is the Navy not moving forward on an unmanned NGAD?

An autonomous, next-generation combat aircraft for the Navy faces several criticisms. Some concerns are valid while others are not. Critics can rightly point out that AI is not ready yet. While this is certainly true, it likely will be ready enough by the mid-2030s when the NGAD is reaching production. 15 years ago, engineers were proud of building a computer that could beat Gary Kasparov at chess. Today, AIs have mastered ever more complex real-time games and aerial dogfighting. One can only expect AI will make a similar if not greater leap in the next 15 years. We need to be future-proofing future combat aircraft. So the question should not be, “Is AI ready now?” but, “Will AI be ready in 15 years when NGAD is entering production?”

Critics of lethal autonomy should note that it is already here. Loitering munitions are only the most recent manifestation of weapons without “a human in the loop.” The U.S. military has employed autonomous weapons ever since Phalanx was deployed on ships in the 1970s, and more recently with anti-ship missiles featuring intelligent seeker heads. The Navy is also simultaneously investing in autonomous surface vessels and unmanned helicopters, proving that there is room for lethal autonomy in naval aviation.

Some have raised concerns that autonomous aircraft can be hacked and RPAs can have their command and control links broken, jammed, or hijacked. But these concerns are no more valid with unmanned aircraft than manned aircraft. Modern 5th generation aircraft are full of computers, networked systems, and use fly-by-wire controls. A hacked F-35 will be hardly different than a hacked unmanned aircraft, except there is a human trapped aboard. In the case of RPAs, they have “lost link” protocols that can return them safely to base if they lose contact with a ground station.

Unfortunately, perhaps the largest obstacle to an unmanned NGAD is imagination. Simply put, it is difficult for Navy leaders, often pilots themselves, to imagine a computer doing a job that they have spent years mastering. They often consider it as much an art as a science. But these arguments sound eerily similar to arguments made by mounted cavalry commanders in the lead up to the Second World War. As late as 1939, Army General John K. Kerr argued that tanks could not replace horses on the battlefield. He wrote: “We must not be misled to our own detriment to assume that the untried machine can displace the proved and tried horse.” Similarly, the U.S. Navy was slow to adopt and trust search radars in the Second World War. Of their experience in Guadalcanal, historian James D. Hornfischer wrote, “…The unfamiliar power of a new technology was seldom a match for a complacent human mind bent on ignoring it.” Today we cannot make the same mistakes.

The future of aviation is unmanned aircraft – whether remotely piloted, autonomously piloted, or a combination. There is simply no reason that a human needs to be in the cockpit of a modern, let alone next-generation aircraft. AI technology is progressing rapidly and consistently ahead of estimates. If the Navy waits to integrate AI into combat aircraft until it is mature, it will put naval aviation a decade or more behind.

Platforms being designed now need to be engineered to incorporate AI and future advances. Human pilots will not be able to compete with mature AI – already pilots are losing to AI in dogfights; arguably the most complex part of their skillset. The Navy needs to design the next generation of combat aircraft for unmanned flight or it risks making naval aviation irrelevant in the future aerial fight.

Trevor Phillips-Levine is a lieutenant commander in the United States Navy. He has flown the F/A-18 “Super Hornet” in support of operations New Dawn and Enduring Freedom and is currently serving as a department head in VFA-2. He can been reached on Twitter @TPLevine85.

Dylan Phillips-Levine is a lieutenant commander in the United States Navy. He has flown the T-6B “Texan II” as an instructor and the MH-60R “Seahawk.” He is currently serving as an instructor in the T-34C-1 “Turbo-Mentor” as an exchange instructor pilot with the Argentine navy. He can be reached on Twitter @JooseBoludo.

Walker D. Mills is a captain in the Marines. An infantry officer, he is currently serving as an exchange instructor at the Colombian naval academy. He is an Associate Editor at CIMSEC and an MA student at the Center for Homeland Defense and Security at the Naval Postgraduate School. You can find him on twitter @WDMills1992.

This article first appeared at CIMSEC.