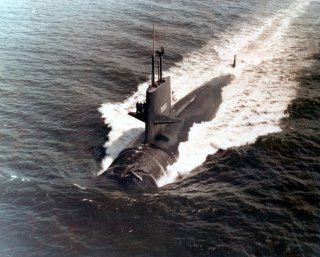 Here’s What You Need to Remember: The Skipjack submarines were not “just” a serially-produced class of nuclear-powered attack submarines—though, in the mid-1950s, that alone would have been a respectable achievement. Rather, the Skipjack class combined two of the great submarine engineering innovations of its time: nuclear power and a teardrop hull design.

One of the most forward-looking submarine classes ever to serve in the U.S. Navy, the Skipjacks paved the way for the country's modern nuclear-powered submarine fleet.

The Skipjack submarines were not “just” a serially-produced class of nuclear-powered attack submarines—though, in the mid-1950s, that alone would have been a respectable achievement. Rather, the Skipjack class combined two of the great submarine engineering innovations of its time: nuclear power and a teardrop hull design. Whereas the earlier Skate-class attack submarines housed an S3W nuclear reactor in a conventional design that resembled the submarines of yore, the Skipjacks employed a forward-looking teardrop hull design that emphasized superior underwater performance. Moreover, the Skipjack class was the first submarine to feature the newer S5W that remained the Navy’s go-to nuclear reactor until the 1970s introduction of the S6G reactor that powered the Los Angeles-class.

These two revolutionary features were not just individually beneficial but actively complemented one another. The Skipjack boats’ S5W nuclear reactors allowed them to stay submerged most of the time, all but removing the need for surface handling optimizations. At the same time, the class registered excellent underwater performance due to its teardrop hull.

It is this potent blend of high-ticket features, skillfully woven into a single submarine class, that arguably earned the Skipjack the title of the U.S. Navy’s first modern submarine. At thirty-three knots submerged, the Skipjacks were the fastest U.S. nuclear submarines until the introduction of the Los Angeles class. They also boasted a fairly robust weapons loadout, consisting of six 533mm torpedo tubes that accepted weapons including the Navy’s workhorse Mark 14 and Mark 16 torpedoes, the Mark 37 anti-submarine homing torpedo, nuclear-capable Mark 45 torpedoes, and advanced Mark 48 torpedoes for high-value submarines and surface targets.

The Skipjacks lived a fairly uneventful service life throughout the Cold War and Vietnam War years, with one tragic exception. The Scorpion became one of only two nuclear submarines to be lost by the U.S. Navy, with the other being the USS Thresher. In May 1968, the Scorpion vanished without a trace while away on an espionage mission in the Atlantic. Parts of Scorpion’s hull were found later that year; the entire, 99-strong crew was presumed to have perished along with the submarine. The Scorpion’s demise remains a topic of conjecture, with theories ranging from a Soviet torpedo attack to a hydrogen explosion. The Navy’s reports on the incident proved inconclusive. The military initially ascribed Scorpion’s loss to an inadvertent torpedo detonation, but that account has been vigorously disputed in subsequent expert analysis. Making matters even more bizarre, the Scorpion incident was one of four submarine disappearances in 1968–the others being the Israeli INS Dakar, French Minerve, and Soviet K-129–all within the span of five months.

The last submarines in the Skipjack series were decommissioned in the early 1990s. Their three decades of service is a lasting testament to a submarine class well ahead of its time.