U.S. Navy and Russian Fighters Had a Deadly Duel Over North Korea 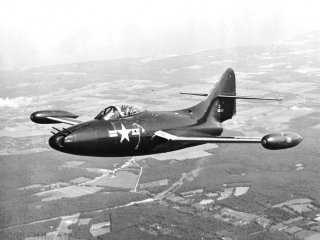 Here's What You Need to Know: The Panther may not have been the top jet fighter of its time, but its pilots matched skill and courage to the gleaming blue jet’s sheer reliability and survivability to carve out a remarkable record in aviation history.

Like the P-80 Shooting Star, the U.S. Air Force’s first jet fighter in operational service, Grumman’s new design retained a traditional straight-wing configuration that limited its performance when approaching the speed of sound. The Grumman designers appreciated the need for naval aircraft to be rugged to withstand harsh flattop landings and condition at sea. The Panther had folding wings to ease stowage on crowded decks, and introduced new pilot-pleasing features such as ejection seats and a pressurized cockpit.​