The U.S. Navy Cannot Defeat North Korea, But It Can Make Its Life Hell 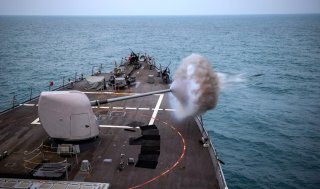