The U.S. Navy Couldn’t Sink Its Own Aircraft Carrier 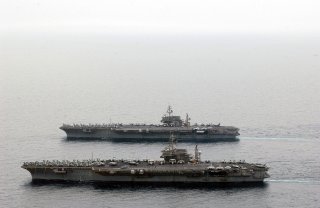 Here’s What You Need to Remember: "So there are two questions that remain for anyone who thinks they even have a shot at taking down one of these enormous steel behemoths," Farley explained. "Can you do it? And even if you can, is it worth it?"

To even try to sink an American flattop, you first must hit it. That's not easy, either. No carrier sails without an air wing with as many as 50 fighter aircraft plus several escorting destroyers, cruisers, and submarines. A virtual wall of defensive weaponry surrounds the flattop out to a distance of several hundred miles.

And if the United States' reaction to the 9/11 terror attacks is any indication, Washington surely would deploy all its remaining military might, including its surviving eight or nine carriers, against the country behind the sinking.