The U.S. Navy Has a Name for Its New Strategy: "Sea Control" 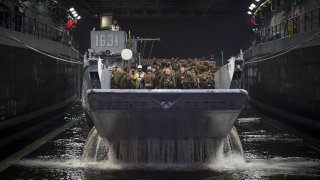 Key Point: The Navy’s emphasis upon “Sea Control” is likely related to the recently released Tri-Service strategic paper called Advantage at Sea: Prevailing With Integrated All Domain Naval Power, an interesting and recently published document with a dedicated section on Sea Control and Power Projection.

The Navy and Marine Corps are refining their conceptual and tactical approach to an interesting strategy referred to as “Sea Control,” a kind of maritime warfare approach looking at multi-domain techniques of establishing land-sea-air presence, controlling choke points and strategic waterways, looking at newer kinds of approaches to amphibious warfare and “denying” a potential enemy from operating in certain high-value areas.

It is an approach that is gaining traction with cutting-edge war planners with the services and industry weapons developers made more possible with the advent of new multi-domain networking technologies, drones and long-range weapons.

The Navy’s emphasis upon “Sea Control” is likely related to the recently released Tri-Service strategic paper called Advantage at Sea: Prevailing With Integrated All Domain Naval Power, an interesting and recently published document with a dedicated section on Sea Control and Power Projection. The strategy, which integrates Coast Guard, Marine Corps and Navy thinking, is intended to “maintain persistent forward presence, conduct sea control and sea denial, and enable power projection, Naval Service investment priorities include: Surface Warfare and Air Warfare. We will increase investments in advanced, precise, long-range, and lethal fires to destroy enemy forces, with the objective of maintaining a sufficient inventory to sustain a protracted conflict,” the strategy writes.

The thinking expands into the integration and application of certain kinds of new weapons platforms, such as arming the LCS with an over-the-horizon Naval Strike Missile, architecting a new fleet of surface and undersea drones and massively prioritizing multi-domain “Integrated” naval power.

“We will invest in a variety of weapons delivery platforms including Marine long-range anti-ship missiles, manned and unmanned surface vessels, submarines, and aircraft. We will increase investments in maritime domain awareness technologies to find, fix, track, and target adversary forces,” the strategy states.

As for the application of this kind of strategy, the Navy and Marine Corps are already making considerable progress through an evolving, multi-domain centric amphibious warfare enabling “island hopping” and land-sea weapons integration. For example, the Marine Corps is advancing a program known as Ground Based Anti-Ship Missile, which involves adapting the ship-fired Naval Strike Missile for transport and land-attack application. This program would allow an amphibious force to set up on an island and stand up anti-ship attack operations. Sure enough, the strategy specifically cites newer kinds of “anti-ship missiles,” which may even be a reference to this program.

Sea Control is likely also intended to be further developed with the upcoming deployment of the Marine Corps’ now evolving Light Amphibious Warship.