The U.S. Navy Must Upgrade its Amphibious Warfare Forces 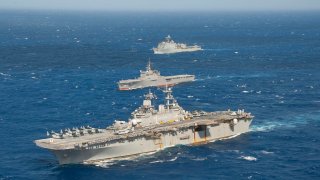 Here's What You Need To Remember: Today, the Navy only has 32 amphibs. Moreover, while 38 is the minimum number required to meet the National Defense Strategy, the demand signals being sent by the COCOMs would suggest that a fleet size of 40 to 50 amphibs makes more sense.

Today, the best U.S. military capability for rapidly addressing emerging regional threats, the 911 force, is the Amphibious Ready Group/Marine Expeditionary Unit (ARG/MEU). The ARG typically consists of three amphibious warfare ships including one large deck ship capable of operating certain fighters and helicopters. The MEU is a combat formation centered on a reinforced infantry battalion plus aviation, logistics and command elements. These formations are able to project tailored and sophisticated power ashore to perform missions that span the spectrum of crises and conflicts.

Amphibious warfare forces will play a pivotal role in an era of renewed great power competition. By virtue of being deployed forward, close to potential theaters of conflict, ARG/MEUs could be particularly useful in countering adversaries’ anti-access/area denial (A2/AD) strategies. They generally operate inside an adversary’s defensive umbrella. This might seem to be a vulnerable position, but, if properly sized and equipped, these formations could act from the opening of hostilities to blow holes in enemy defenses. In addition to defeating hostile A2/AD systems, ARG/MEU can help U.S. combatant commands create their own version of an A2/AD “umbrella.”

Larger amphibious warfare formations, capable of lifting entire Marine Expeditionary Brigades with their aviation and logistics element, could play a major offensive role in a future high-end conflict. Exploiting their inherent mobility and increasing lethality, these forces will provide theater commanders with a powerful offensive capability. Such a force would pose an ongoing threat to an adversary’s flanks and rear areas. They could defend or, if necessary, seize critical terrain and forward bases.

The Navy is acquiring new platforms and systems that will enhance the effectiveness of amphibious forces in operations across the spectrum of conflict. The Navy is building a new large amphibious warship, the America-class Landing Helicopter Assault (LHA), capable of supporting both Marine landing forces and air operations. The newest LHAs, beginning with LHA 8, will again have a well deck, a hanger-like structure that allows the rapid on and offloading of air cushion platforms (LCAC) and amphibious vehicles.

The Navy also is acquiring the San Antonio-class Amphibious Ship Dock (LPD-17). The LPD-17 program was designed to replace three existing classes of amphibious ships that are reaching the end of their service life. The LPD-17s are designed to support the deployment of Marine landing forces. The LPD-17 also incorporates a range of new technologies and systems over its predecessors that mark it as a significant advancement in overall capability. In addition to improved interior spaces that allow it to carry and move more cargo, the LPD-17 has advanced electronics and sensor systems, signature reduction and modern command and control capabilities.

As of FY 2018, a variant of the LPD-17, so-called Flight II, is being procured to replace the older Landing Ship Dock (LSD). The Navy is looking to enhance the capabilities of this class by the addition of advanced systems such as the Enterprise Air Surveillance Radar, directed energy weapons and even long-range missiles.

The Navy’s 355-ship force level goal calls for acquiring and maintaining a 38-ship amphibious force that includes 12 LHD/LHA-type ships, 13 LPD-17 ships, and 13 LSD/LPD-17 Flight II-type ships. The current requirement for 38 amphibious ships covers the fleet size needed to deploy the assault echelons of two Marine Expeditionary Brigades. It will also ensure that the Navy can maintain three ARGs forward at all times.

Will the Sea Services be able to build the required fleet of amphibious warfare ships? Today, the Navy only has 32 amphibs. In addition, the older LHDs and LSDs are aging out rapidly. Moreover, while 38 is the minimum number required to meet the National Defense Strategy, the demand signals being sent by the COCOMs would suggest that a fleet size of 40 to 50 amphibs makes more sense. The three ship ARGs are routinely split up in order to extend their contributions across large and diverse theaters of operation.

The Nation needs a larger amphibious warfare fleet and it needs it faster. The answer is to buy amphibs the way the Navy is now acquiring aircraft carriers, surface combatants and submarines - by contracting for multiple ships.

The Navy just signed a contract to build the next two Ford-class aircraft carriers as a block, allowing economical procurement of materials, the optimum management of labor and the efficient scheduling of workflow. This deal will save the Navy $4 billion. Virginia-class attack submarines are routinely acquired in blocks of nine or ten boats, thereby saving billions of dollars. The Navy has used the block buy approach for both the Littoral Combat Ship and the John Lewis-class oiler. A similar approach, multi-year procurement contracts, were recently awarded to General Dynamics’ Bath Iron Works and Huntington Ingalls Industries' Ingalls Shipbuilding for a total of ten Arleigh Burke DDG-51 Flight III destroyers.

The frugal way to reach the 38-ship goal and to do so faster is to accelerate production of America-class LHAs and speed up the procurement of LPD-17 Flight II ships. This can be achieved by contracting for multiple ships at a time. This proven approach both saves money and avoids breaks in production. The savings could be enough to allow the Navy, in essence, to acquire a ship for free. In many instances, multi-year procurements and bloc buys also reduce the time required to build a ship or submarine.

Daniel Gouré is a senior vice president with the Lexington Institute. He worked in the Pentagon during the administration of President George H.W. Bush, and he has taught at Johns Hopkins and Georgetown universities as well as the National War College.