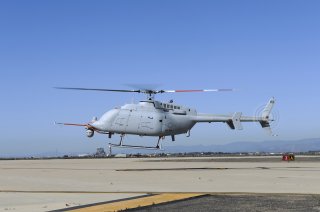 Here's What You Need to Remember: The MQ-8C is an unmanned version of the Bell 407 helicopter. The Navy is buying 38 MQ-8Cs at a cost of around $20 million apiece.

The U.S. Navy has begun testing its latest drone helicopter with its newest sea-base ship. The trial could lead to the base vessels deploying with mixed fleets of manned and unmanned helicopters.

Williams, which commissioned in March 2020, is the second of three Expeditionary Sea Base ships in the U.S. fleet.

The ESBs are huge, floating outposts. 785 feet long and displacing 90,000 tons of water, they can accommodate hundreds of special operations forces, mine-warfare crews, drone-operators and other specialists along with these troops’ boats, helicopters and drones.

The MQ-8C is an unmanned version of the Bell 407 helicopter. The Navy is buying 38 MQ-8Cs at a cost of around $20 million apiece.

The Navy originally developed the MQ-8 as a robotic strike vehicle for the fleet’s Littoral Combat Ships. LCSs and other smaller warships have deployed with the smaller MQ-8B version of the unmanned copter, but the Navy wasn’t entirely pleased.

The LCS in particular proved too small efficiently to support an armed robot. An LCS has just one weapons magazine for all the vessel’s weapons as well as the weapons for its embarked aircraft. The Navy decided it was best to load up the MQ-8C with sensors and data-links and use it as an aerial scout, spotting targets for other ships and aircraft to attack.

Indeed, the Navy is leaning toward embarking manned helicopters about the ESBs for armed missions.

The task force was in the Persian Gulf, practicing tactics for destroying enemy boats. The exercise clearly also was a show of force targeting Iran, whose large force of gun- and rocket-armed speedboats poses a serious threat to naval and commercial vessels in the Gulf.

“The operations, which are designed to enhance the capabilities of U.S. forces to respond to surface threats, have involved Puller performing as a landing base platform for the Apaches, while Cyclone-class patrol-coastal ships select simulated targets for them to engage. The guided-missile destroyer USS Paul Hamilton also participated in the joint operations,” the Navy stated.

Parsing that statement, it’s clear that the fleet has devised a new and potentially capable ship-mix that could be a preview of future deployments. Now add MQ-8Cs to the mix. The unmanned copters could help the patrol boats spot targets. The Apaches would swoop in to destroy them.

It’s hard to overstate how exciting Task Force Saber and the MQ-8C testing are for advocates of a new fleet design for U.S. maritime forces.

The Navy and U.S. Marine Corps both recognize the need to deploy their people, ships and aircraft in new ways in order to combat both the irregular threat from Iranian forces and the conventional threat from an increasingly well-armed China—all while operating within flat overall budgets.