The U.S. Navy's Plans for a New Destroyer May Never Come to Fruition 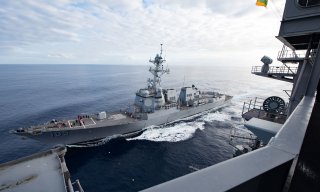 Here's What You Need to Remember: The moves would save more than $10 billion from an overall $100-billion, five-year shipbuilding scheme, but would mean a smaller fleet than the Navy and lawmakers wanted. Instead of 355 front-line ships, the fleet might top out at just 310.

David Axe served as Defense Editor of the National Interest. He is the author of the graphic novels  War Fix, War Is Boring and Machete Squad. This first appeared in May 2019 and is being reposted due to reader interest.