The U.S. Is Not 'Safe' For Some Refugees 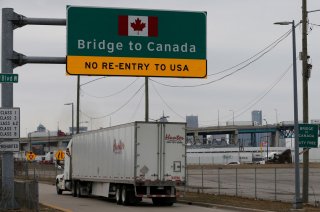 Under the agreement, refugee claimants entering Canada at land ports-of-entry can be returned directly to the United States without being allowed to make a refugee claim in Canada. The agreement was a quid pro quo for concessions offered to the U.S. after 9/11, including a “smart border” accord, enhanced information-sharing and joint border enforcement.

Advocates for refugees have long argued that the STCA violates international refugee law and Canadian constitutional law. Differences between the refugee determination systems in Canada and the U.S., as well as differences in the rights enjoyed by refugee claimants in both countries, mean that some people who would be recognized as refugees in Canada would be denied protection south of the border.

In other words, the U.S. is not “safe” for at least some refugees.

These arguments took on an especially urgent tone after Donald Trump’s election as American president in November 2016.

The Trump administration has implemented many racist, xenophobic and anti-refugee policies to dissuade people from seeking asylum in the U.S. For example: Harsh detention practices (including detention of young children), family separation, restrictions on the refugee definition (such as excluding people facing gender-based violence), militarization of the border and of course attempting to build a wall along the U.S.-Mexico border.

This prompted a growing chorus of voices — from law professors to human rights organizations and political parties — to call on Canada to suspend or withdraw from the STCA.

Their arguments are persuasive. How can a country be considered safe for refugees if it locks up refugee kids in cages or refuses refugee protection to women facing gender-based violence?

Unfortunately, these voices have been ignored. Instead, worried about critiques from the right about weakness on border control, the federal government under Prime Minister Justin Trudeau contemplated trying to get the U.S. to extend the agreement to the entire border — not just official land ports of entry.

The U.S., however, has little incentive to expand the agreement, which would block even more asylum-seekers from leaving the United States for Canada, and there has been little movement on this front.

This inaction left the matter to the courts. Lawyers for refugee and human rights organizations, as well as refugee claimants, went to Federal Court, arguing that the STCA is unconstitutional.

Her decision focused narrowly on what happens to refugee claimants who are turned away under the STCA.

And what happens is atrocious. Refugee claimants are handed over to American officials who detain them for weeks. Conditions of detention are inhumane. Solitary confinement is common. Access to lawyers is restricted, which makes it harder to secure refugee protection.

Worse still, these are intentional policies aimed at making the experience of seeking asylum in the U.S. so traumatic that others will be discouraged from making the same journey.

As Justice McDonald held: “The evidence clearly demonstrates that those returned to the U.S. by Canadian officials are detained as a penalty …. penalization of the simple act of making a refugee claim is not in keeping with the spirit or the intention of the STCA or the foundational conventions upon which it was built.”

No safety for refugees

In other words, U.S. immigration detention practices violate international refugee law and undermine the basic premise of the STCA that both countries are safe for refugees.

So there we have it. A Canadian court has determined that American detention practices are “grossly disproportionate” and “shock the conscience,” and that Canada cannot be complicit by sending refugee claimants to the U.S. to face these practices without violating constitutional rights to life, liberty and security of the person.

The question now is what comes next.

The Federal Court suspended its declaration of constitutional invalidity for six months to allow Canadian Parliament to respond.

The government could appeal the decision. If that happens, the STCA will be tangled up in the courts for years — during which time more asylum-seekers like Nedira Mustefa, one of the applicants in the case, will find themselves in solitary confinement in U.S. detention centres. Mustefa told the court she felt “scared, alone and confused,” with no sense of when she would be released, during her time in American detention.

Alternatively, the Canadian government can send a clear signal that it cares about constitutional and international law, heed Justice McDonald’s findings and take steps to immediately suspend the STCA.

The detention practices that she focuses on in her decision are only one among many ways in which the U.S. has attacked refugee rights. These attacks are mounting. The Trump administration recently proposed reforms that would gut what remains of the American asylum system. Every day that the STCA remains in effect, Canada continues to be complicit in these attacks.

Enough is enough. The STCA must be suspended.

Sean Rehaag is Director of the Centre for Refugee Studies at York University and an Associate Professor at its Osgoode Hall Law School.

Sharry Aiken is an Associate Professor of Law at Queen's University.