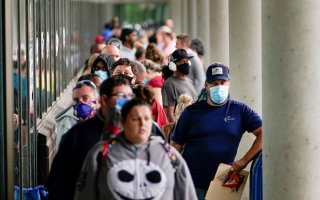 Journalists, economists, and policymakers look to unemployment claims data released every Thursday morning to provide the most up-to-date pulse of the US labor market and broader economy. These data often inform headlines that can quickly become conventional wisdom, like an August headline that stated “The rise in jobless claims may be a warning to Congress that the economy needs stimulus.” But a closer look at unemployment claims data released yesterday and from recent weeks shows the number of Americans collecting major unemployment benefits has been dropping rapidly, indicating more are returning to work following the expiration of federal bonus payments in July.

The chart above displays benefit rolls for three major unemployment programs: the state Unemployment Insurance (UI) program, the federal Pandemic Emergency Unemployment Compensation (PEUC) program, and the currently federal Extended Benefits (EB) program. PEUC and EB now provide a combined up to 33 weeks of extra benefits to individuals exhausting up to 26 weeks of UI checks, depending on the state. The chart does not include claims under the Pandemic Unemployment Assistance (PUA) program, which has been beset by major data irregularities and significant fraud.

As the chart shows, unemployment benefit claims declined rapidly following the end of temporary benefit programs like the $600-per-week federal unemployment bonuses that expired July 25 and the subsequent $300-per-week federal add-on that expired September 5. Indeed, unemployment claims under these programs have fallen faster since the $600 bonuses ended than before. In the 11 weeks leading up to the expiration of the $600 bonuses on July 25, continuing claims under these programs fell 25 percent, while in the 11 weeks since then claims dropped nearly 30 percent. Continuing claims fell by nearly 1.8 million (almost 13 percent) in the past two weeks alone.

Such declines are contrary to the warnings of some that the expiration of federal unemployment bonuses and other temporary policies could have the opposite result. For example, The New York Times stated in June, “Economists said the gains in May indicated that Congress and the Federal Reserve had at least partly succeeded in limiting permanent economic damage by providing trillions of dollars in assistance to households and businesses. But that aid is now in jeopardy, and economists warned that there was no guarantee the job market would continue to improve without it.”

Notably, these data account for the movement of benefit recipients from state UI (which lasts up to 26 weeks) onto federal extended benefit programs. That transition is now occurring for many long-term unemployed, as would be expected more than six months after the large spike in initial UI claims that began in late March. But even in the states with shorter UI durations like North Carolina, the latest data show many long-term unemployed are shifting from PEUC (receipt of which fell by 15,000 in the state in the most recent week) onto the EB program (which grew by 13,000). EB benefits are available for up to 13 weeks in North Carolina and for up to 20 weeks in other states. That suggests recent declines generally are not due to people exhausting all benefits.

There are still enormous challenges in the labor market, with elevated initial claims and millions remaining on the unemployment rolls, including rising numbers of long-term unemployed workers. Congress may need to continue current extended benefit policies at the end of the year and should certainly focus more on efforts to reconnect the long-term unemployed with work. But the bigger picture shows declining numbers collecting unemployment benefits each week, with the declines accelerating since the $600 bonuses expired. Like rapid declines in the unemployment rate, that indicates more continue returning to work, which is good news for both workers and the economy.