The USS Massachusetts Was A World War II Battleship Killer 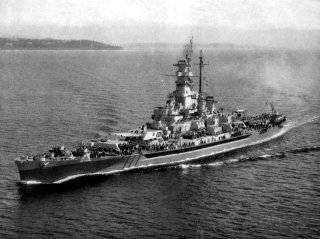 Here's What You Need To Remember: Massachusetts replied, silencing Jean Bart with five hits. Massachusetts and its escorts then opened fire on and sank a pair of destroyers. French shore batteries inflicted superficial damage on Massachusetts, the scars of which are still evident on its decks today.

The U.S. Navy began construction of its first fast battleships in 1937, with the two ships of the North Carolina class. The restrictions of the Washington and London Naval Treaties had imposed a battleship “holiday,” and mandated limits on the size of new warships. Treaty requirements limited displacement to thirty-five thousand tons, and (after Japan’s exit from the treaty triggered an escalator clause) gun size to sixteen inches. While intermediate plans had focused on relatively slow ships (around twenty-three knots), war-game experience and intelligence about the development of foreign ships made clear that this would prove far too slow, and designers eventually opted for a speed of twenty-seven knots. The U.S. Navy followed up the two in the North Carolina class with the four South Dakotas. Initial plans for the South Dakotas again called for a reduction in speed, which would allow them to operate with the older ships of the battle line.