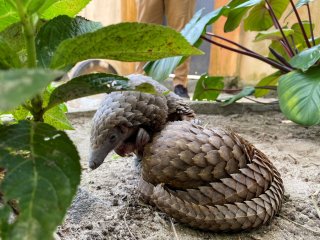 In November and December 2010, UNESCO and Cambodian authorities invited researchers from the Muséum National d'Histoire Naturelle in Paris to explore several sites in northern Cambodia. The goal was to study the biodiversity of bats near the Temple of Preah Vihear, and a large number of bats species were caught during this survey, including eight types of horseshoe bat (genus Rhinolophus). They’re of great interest for virologists, as they are the reservoir of all Sarbecoviruses, the group of coronaviruses that includes SARS-CoV and SARS-CoV-2, respectively responsible for the SARS epidemic in 2002-2004 and the current Covid-19 pandemic.

In 2020, 10 years after the expedition, the samples stored in a freezer at -80°C were taken out and tested by the Institut Pasteur of Cambodia (IPC) to look for Sarbecoviruses. A PCR test showed two positive results and a full sequencing of their genome started. Two variants of a virus close to SARS-CoV-2 were discovered in two bats of the species Rhinolophus shameli we captured in 2010 in a cave in the province of Steung Treng.

The results of this research are freely available on the bioRxiv website and pending peer review. (This practice is now widely used to rapidly transfer new knowledge about the Covid-19 pandemic.)

The discovery is important because the virus is the first found outside China that is close to SARS-CoV-2 – of the 29,913 aligned bases in the two viruses’ genomes, 93% are identical. All those previously described were detected in animals collected in China, including two viruses found in two species of Rhinolophus bats in southern China, and two more divergent viruses (90% and 85%) found in pangolins seized by Chinese customs in Guangdong and Guangxi provinces.

The new virus from Cambodia was detected in a bat species endemic to Southeast Asia that does not extend beyond Yunnan, where the two previous bat SARS-CoV-2-like viruses were found.

The direct implication is that viruses similar to SARS-CoV-2 have been circulating for several decades, as revealed by molecular dating, throughout Southeast Asia and Yunnan, and that different species of bats could have exchanged these viruses in the caves they inhabit.

The data in the figure above indirectly support the hypothesis that the SARS-CoV-2 group actually originated in mainland Southeast Asia. Indeed, human populations in Cambodia, Laos, Thailand and Vietnam appear to be much less affected by the Covid-19 pandemic than other countries in the region, such as Bangladesh, Myanmar, Malaysia, the Philippines and Indonesia. This suggests that the populations of these four countries may be benefiting from a level of herd immunity to Sarbecoviruses.

Apart from bats, the Malayan pangolin (Manis javanica) is the only wild animal in which SARS-CoV-2-like viruses have been found. The problem is that these discoveries were made in a rather special context, that of pangolin trafficking. Several sick animals were seized by Chinese customs in Guangxi province in 2017-2018 and in Guangdong province in 2019.

Even if the viruses sequenced in pangolins are not that close to SARS-CoV-2 (one was 85% identical and the other 90%), they indicate that at least two Sarbecoviruses could have been imported into China well before the Covid-19 epidemic. Indeed, it has been shown that pangolins from Southeast Asian countries have contaminated each other while in captivity on Chinese territory.

The question remains on how the pangolins became infected initially. Could it have been in their natural Southeast Asian environment, before being captured? The discovery of a new virus close to SARS-CoV-2 in bats in Cambodia supports this hypothesis, as Rhinolophus bats and pangolins can meet, at least occasionally, in caves in Southeast Asia. This strengthens the hypothesis that pangolin trafficking is responsible for multiple exports of SARS-CoV-2-like viruses to China.

In 2002-2004, several small carnivores kept in cages in Chinese markets or restaurants were found positive for SARS-CoV, such as the masked palm civet, the raccoon dog and the Chinese ferret-badger.

These small carnivores are solitary and nocturnal mammals – just like pangolins. In the wild, the occasional contamination of an individual of these species by a bat Sarbecovirus has very little chance of causing an epidemic. However, an infected individual placed in an intensive breeding facility can lead to a rapid and uncontrollable evolution of this type of virus.

In 2020, American minks bred for their fur were contaminated with the SARS-CoV-2 virus from humans in Europe and the United States. In November 2020, millions of mink in Denmark were culled after they became infected with Covid-19 and in turn passed a mutated form back to humans.

The Covid-19 crisis taught the world that keeping immense numbers of small carnivores in captivity is a major health risk: viruses can spread and evolve rapidly in breeding facilities, potentially producing more contaminating or more dangerous variants. As pangolins and small carnivore species were frequently stored and sold together in wet markets, a “snowballing effect” due to interspecies viral transmission could be the last step in starting the human Covid-19 pandemic.

This scenario is mot likely as nearly 1 million pangolins have been trafficked in the past decade and millions of small carnivores are bred in fur farms in China.

To test this hypothesis and understand why epidemics are emerging in China and not elsewhere, it would be interesting to look for possible infection by Sarbecoviruses in samples from American minks and raccoon dogs bred for their fur in China. These samples exist, they have been collected in the last two decades to study the canine distemper virus or avian flu viruses H5N1 and H9N2.

This article was translated from the original French by Elsa Couderc with help from DeepL.