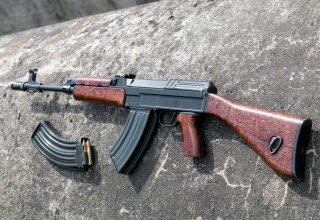 Key Point: Despite being a member of the Warsaw Pact, throughout the Cold War Czechoslovakia was among the Communist Bloc nations that stressed heavy industry and consumer goods over agricultural and services – and at the same time, it remained the center of the production of armaments. This dated back to the past century when the region was under the control of the Austro-Hungarian Empire.

After the onset of communism, the regime continued to develop its arms industry, and Czechoslovakia exported small arms to various nations including Egypt, which was among the sparks that resulted in the Suez Crisis in 1957.

One of the domestically developed weapons was the SA Vz. 58 – "Samopal vzor 58" or "Submachine gun model 58." However, this was not a submachine gun – which typically fires pistol rounds – and instead, it was developed to fire the 7.62x39mm intermediate cartridge used notably in the Soviet-designed AK-47 assault rifle. The term "samopal" was used by the Czech arms designers instead to denote all select-fire weapons that were adopted following the Vz. 52 semi-automatic rifle.

Externally the Vz. 58 has more than a passing similarity to the AK-47, and it could be argued that both were influenced by the German StG44, which was developed during the Second World War and for which the term "assault rifle" originated. Thus, while visually similar the two weapons share no common parts including the magazine, even though both are chambered for the same cartridge.

Moreover, while both weapons are gas-operated firearms, the Vz. 58 utilizes a short stroke gas piston while the AK-47 uses a long stoke system; and the Vz. 58 has a titling locking bolt to the AK-47's rotating bolt.  In addition, the two firearms have completely different hammers, bolt stops and even magazines and feed systems. The Vz.58 is about nearly a pound and a half lighter than the AK-47, with a weight similar to that of the American M16.

The Vz. 58 was produced in two versions for the Czechoslovakian military from 1959 to 1984, and both were select-fire assault rifles offering semi-automatic and fully automatic modes, with the latter having a rate of fire of 800 rounds per minute. The Sa Vz. 58 P (Pěchotní; "Infantry") featured a fixed wooden or synthetic stock, while the Sa Vz. 58 V (Výsadkový; "Airborne") was developed for paratroopers and featured a side-folding metal stock.

During the Cold War, the weapon was widely exported to other Communist states around the world and was also used various insurgent forces. While its parts weren't interchangeable with the AK-47, the Vz. 58 was used alongside the Soviet weapon during the Vietnam War as both fired the same round.

The Vz. 58 also stood in for AK-47's in a scene in the 2003 film Lord of War, which was filmed in the Czech Republic but was meant to take place in Ukraine. According to the film's director the production found it cheaper to rent live assault rifles than to rent blank converted prop guns.