Want to Deter War? Keep Tanks on the Front Lines 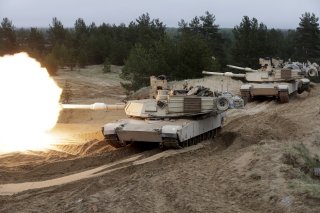 Here's What You Need to Know: Deploying troops on short notice in direct response to an imminent military threat can stop a war from breaking out but tend to leave the deploying country no better off than it was before, RAND found.

Heavy ground forces are best at deterring war and boosting a country’s overall influence in the aftermath of a crisis.

But the heavy forces, which include armored vehicles such as tanks plus artillery and air-defense systems, merely should be near a conflict zone, not in it.

That’s the conclusion of a February 2020 study by RAND, a California think tank with close ties to the U.S. military.

The RAND report underscores the wisdom of the U.S. Army’s efforts permanently to station more heavy forces in Europe. By the same token, the study is a reminder that the United States’ conventional deterrence in Europe might still be inadequate even after current reinforcements are in place.

But in order to balance deterrence against provocation, ground forces should make their bases in countries neighboring the countries where war is mostly likely to break out. “When U.S. forces, particularly light ground forces, are stationed inside the borders of the ally or partner to be defended rather than in nearby states in the broader theater, they are associated with an increased likelihood of militarized disputes,” RAND pointed out.

So-called “crisis deployments” -- in other words, deploying troops on short notice in direct response to an imminent military threat -- can stop a war from breaking out but tend to leave the deploying country no better off than it was before, RAND found.

Strategically speaking, it’s more advantageous for the defender to keep heavy forces on a permanent basis near the conflict zone, according to the think tank.

RAND’s findings are consistent with other studies the Army’s recent experience.

The administration of President Barack Obama cut the two Europe-based tank brigades in the wake of the 2011 debt-ceiling squabble with Congress that resulted in the Budget Control Act and automatic "sequestration" budget cuts. Army troops permanently in Europe declined from 40,000 to around 25,000.

Soon an Army regiment with 300 Stryker wheeled vehicles was the only mechanized American force permanently in Europe. The Army's 173rd Airborne Brigade also is based on the continent.

In 2014, Russia invaded Ukraine. The Pentagon in response scrambled to restore its fighting strength in Europe. The Obama administration budgeted billions of dollars for temporary deployments to Europe under the auspices of the European Reassurance Initiative.

But that might not be enough. Russia keeps around 760 tanks in units within quick striking distance of NATO's Baltic members. NATO countries together keep around 130 tanks in the same region -- and around 90 of those are the American M-1s on their temporary rotation.

The think-tank’s 2020 study is a reminder that the calculus hasn’t changed. If the United States wants to deter war and grow its influence, it’s best for it to base armored vehicles near a potential war zone. Permanently.