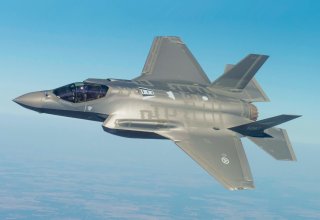 Here's What You Need to Remember: Greece and Turkey have been de facto allies since 1952 for no other reason than they are both members of NATO. However, there has been open hostility between the two nations since Greece won its independence from the Ottoman Empire in 1830. The nations are now at odds over energy reserves including the discovery of natural gas in the Eastern Mediterranean waters.

In news that likely won't be well received in Ankara, it has been reported that the next U.S. military partner to receive the Lockheed Martin F-35 Lightning II Joint Strike Fighter could be the Greek Air Force. According to online reports, to add insult to injury, the six F-35s that could head to Athens would be painted "blue and white" and are the very same aircraft that were originally destined for Turkey.

Turkey was ejected from the F-35 program after Ankara purchased the Russian-built S-400 Triumf, which NATO officials have maintained is incompatible with other NATO systems. Turkey has been a longstanding and trusted partner and NATO Ally for over 65 years, but accepting the S-400 undermines the commitments all NATO Allies made to each other to move away from Russian systems.

The S-400 Triumf (NATO reporting name: SA-21 Growler) was developed and produced by Almaz-Antey. It was designed to provide protection from airstrikes including cruise, tactical and operation ballistic missiles as well as intermediate-range missiles in a radio-jamming environment. The S-400 can also be used against ground installations. It can also launch 40N6 missiles and engage targets at a distance of up to four hundred kilometers at up to six times the speed of sound, and at an altitude of up to thirty kilometers under intensive enemy fire and jamming. It entered service in 2007.

According to reports, Greece will eventually be supplied with twenty of the fifth-generation stealth aircraft, with the first six arriving as soon as 2022. That first batch of aircraft could be delivered at the same time the Greek Air Force receives six Rafale fighter jets from France, the Greek-language outlet Estia first reported. The sale is part of the "government to government" process.

There is little doubt that it has also come about due to the activation of the S-400 Triumf anti-aircraft missiles systems. Turkey first tested the platform over the Black Sea earlier this month for the first time during drills near the town of Sinop on the country's northeastern coast. Turkish media, including the television channel A Haber, which is close to the government albeit not officially state-run, confirmed that the launch did occur.

It has also been reported that in addition to the sale and eventual delivery of the F-35 to Greece, NATO forces could even reposition its presence away from the Incirlik Air Base in Turkey to an airbase on the Greek island of Crete. German lawmakers had suggested withdrawing troops and weaponry from the base and in September 2017 the German military left Turkey and was redeployed at an airbase near Azraq in Jordan.

Last year the United States Congress began to study the possibility of removing U.S. nuclear weapons and troops from the base as well. However, Turkish President Recep Tayyip Erdogan has countered by suggesting that Turkey could shut down the base completely instead.

Greece and Turkey have been de facto allies since 1952 for no other reason than they are both members of NATO. However, there has been open hostility between the two nations since Greece won its independence from the Ottoman Empire in 1830. The nations are now at odds over energy reserves including the discovery of natural gas in the Eastern Mediterranean waters.