The War on Meth Plays into Drug Cartels' Hands 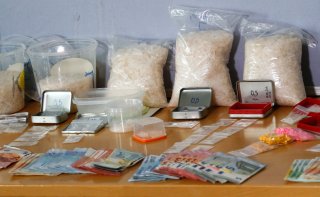 Congress passed the Combat Methamphetamine Epidemic Act in 2005, a year when roughly 2,400 people died of meth‐​related overdoses, which made the very effective decongestant pseudoephedrine “behind the counter,” while restricting the amount that patients can buy, hoping to cut off the supply of this ingredient to local meth labs throughout the country. Mississippi and Oregon went even further, designating the decongestant “prescription‐​only.”

That, in conjunction with stepped up S.W.A.T. team raids on local labs, chased the domestic illegal meth industry south of the border and into the arms of Mexican drug cartels. While American allergy sufferers had to settle for less effective decongestants, the cartels soon learned there are more efficient ways to produce meth (anyone who watched the TV series “Breaking Bad” learned this as well).

The Journal article reports that the cartels’ organization and efficiency have led to a saturation of the U.S. market. (Reflecting that, the latest provisional overdose death statistics from the Centers for Disease Control and Prevention reveal methamphetamines were involved in more than 18,000 of the 76,000 drug overdose deaths for the year ending April 2020, second only to fentanyl as the principal drug involved in overdose deaths.) So now the cartels are breaking into the European market and see the Netherlands as a potential meth‐​making hub. The cartels provide Chinese chemicals and experienced Mexican “cooks” to their Dutch partners and use Dutch equipment to make and distribute the meth. While meth use is on the rise in much of Europe, Portugal appears to be bucking the trend. In fact, ever since Portugal decriminalized all drugs in 2001, nonmedical drug use and substance use disorders have dropped relative to the rest of Europe.

There is a lesson in all of this: rather than continue the never‐​ending game of “whack‐​a‐​mole” that describes the war on drugs, policymakers at home and abroad should deny the cartels the market opportunities that only exist because of drug prohibition by bringing prohibition to an end.