War By Other Means: China Won’t Fight America Like You Expect 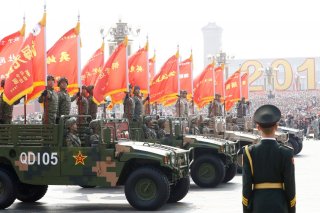 Here's What You Need to Know: Sage PLA strategists will craft tactics to disrupt those information links or disable them altogether. Fragment the enemy network and you can fall on the fragments and eradicate them one by one. Or, better yet, if the PLA can sow paralysis in an enemy system-of-systems for long enough to accomplish its goals, then it may not need to bother trying to annihilate individual units.