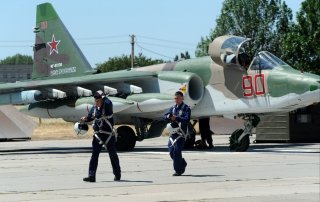 Frogfoots were then briefly withdrawn, but in 2017 improved Su-25SM-3 model aircraft returned, equipped with the improved SOLT-25 electro-optical sensor in the nose, including an infrared imager and a modern laser targeter, as well as Metronome communications systems.

New Vitebsk self-defense systems and L-370-3S jamming pods also allowed the Su-25 pilots to take greater risks, though a Su-25 was shot down by a missile early in 2018. Su-25s were also involved in a tense confrontation with U.S. F-22 stealth fighters in December 2017.

Overall, Russian aviation demonstrated improved technical and operational sophistication by 2018, including increasing adoption of some elements of Western-style network-centric warfare.  However, high-altitude unguided bombing methods leaning on the SVP-24 system would be of limited applicability in a conflict against a foe with serious air defenses and satellite-spoofing capability.

Sébastien Roblin holds a Master’s Degree in Conflict Resolution from Georgetown University and served as a university instructor for the Peace Corps in China. He has also worked in education, editing, and refugee resettlement in France and the United States. This article first appeared last year.