Warhorse: The U.S. Marine Corps Has A Jet Fuel-Powered Motorcycle 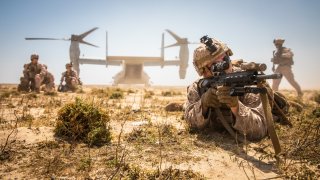 Here's What You Need to Know: This is a motorcycle unavailable for civilian purchase.

The warhorse the Marine Corps and HDT decided to use as their base model is the legendary Kawasaki KLR650, known and revered for its extreme ruggedness and reliability. The KLR650 was originally available in 1987, and since then has logged millions of miles across the globe and has a dedicated fanbase all over the world.