Warning: Some Sites for TSA Pre-Check Sign-up Aren't What They Seem 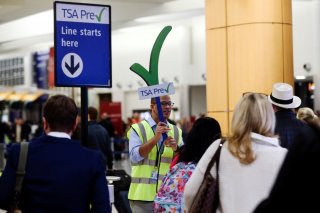 A lot of people, in these days of reopened travel, are looking into taking that trip that they haven’t been able to take since before the pandemic. And the prospect of longer-than-usual airport lines is encouraging some to sign up for the TSA Pre-Check program, which will allow them to bypass those airport security lines.

But those signing up online for TSA Pre-Check should be extra careful, because a constellation of fake websites has sprung up of late that appears to be the real sign-up page, but is actually something else.

When you search Google for “TSA Pre-Check,” one of the top results is a paid Google ad for a site called “TSA Application Form | TSAPrecheck," which uses the URL “https://tsaprogram.ttp.us.com/application,” while when one clicks over, it appears the URL is “AssistGov.com.”

This is not, alas, the real TSA Pre-Check sign-up website. The bogus site even includes a disclaimer at the bottom, stating “we are not the United States government or associated with it. There are no guarantees you will be granted a known traveler number by the government. We try to make sure everything is submitted correctly to eliminate rejections from submission errors. The TSA PRECHECK trademark is owned by the Department of Homeland Security (DHS). Use of DHS-owned trademarks does not imply endorsement by DHS or the Transportation Security Administration. This website is not affiliated with the Department of Homeland Security (“DHS”) or the Transportation Security Administration.”

When I was careless and attempted to sign up there, I got a fraud alert from my credit card company and was then directed to the actual TSA Pre-Check site, which is https://www.tsa.gov/precheck. The lack of a .gov domain should have been a giveaway, as should have the word “Benefits” being spelled wrong on the site’s menu. In addition, it attempted to charge me $140, when the actual price for Pre-Check is $85.

Indeed, the Better Business Bureau has been warning of late about such sites.

“You do a web search for one of the programs above that are designed to help speed known travelers through airport security. Your web browser displays a list of results. The official website likely appears high up on the list. But also included are websites designed to look just like the official one,” BBB said of the scam and how it works. "When you click on the website, you find a third-party company that either impersonates the government department or offers to do all the paperwork for you. These sites may charge you the cost of the application fee, plus a hefty service fee to cover the cost of their ‘help.’ In addition, you’ll be asked to fill out forms with sensitive, personal information including your full name, passport number and home address.”

The Bureau advises travelers to double-check the URL before signing up for anything like that, and also to use a credit card for online purchases since fraudulent services can be disputed.

Local Better Business Bureaus have also been issuing their own warnings about the scam.

"What we are running into across the nation that the bureaus are encountering is the fake websites that look just like the TSA site," said Barry Moore, president and chief executive officer at the Better Business Bureau serving Central Virginia said, per CBS 19 News. "You put into your browser, like TSA precheck or something to see what programs pop up and several pop up, so you go to one and it looks good and asks for all the right information and you think it's all on the up and up and frankly a lot of times it's proving to be a fake.”

BBB’s “Scam Tracker” site shows many examples of similar sites, including one located at “https://tsa.onlineentrypass.com/,” which claims to be affiliated with a nonexistent organization called the “International Bureau of Immigration.”

It’s unclear why Google has allowed the scam version of the Pre-Check site to sit atop its paid results. It’s also unclear what type of criminal charges the creators of the fake sites, assuming they are located in the United States and within the reach of law enforcement, can be expected to face, but stealing massive amounts of money and impersonating government agencies are likely looked down upon by the federal government.

Meanwhile, all the way back in the spring of 2020, long before any coronavirus vaccines were on the horizon, a company called NetObjex, Inc. announced plans to launch an app called COVID PreCheck, which would allow those with coronavirus antibodies to show a “TSA PreCheck-style clearance.”

“In much the same way that Facebook or Google IDs are digital identities, these ‘passports’ will provide digital records of COVID-related exposure, which will be securely maintained using blockchain technology” Raghu Bala, founder of NetObjex, said in the announcement last year.

The idea was basically to provide what is now known as a “vaccine passport,” although it doesn’t appear to have taken off in any major way. Its URL now redirects to a site with the name “COVID PreAuth”—indicating that perhaps there was a legal problem with using the word “Pre-Check”—and the app of that name does not appear to currently be available in the App Store.