Warriors Through the Ages: How the U.S. Army Differs from the Romans 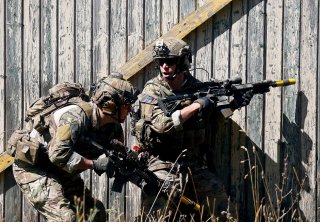 Here's What You Need to Know: While Roman soldiers marched hundreds of miles to the battlefield with their equipment, Americans are blessed to mostly arrive in their areas of operation via air travel.

For millennia, soldiers on battlefields the world over have spilled each other’s blood in the name of God, tribe, clan, king, and country. They have fought the enemy du jour, and tried to kill him while avoiding death themselves, all while under the command of princes, emperors, warlords, generals, and occasionally, normal citizens who took up arms to address some grievance or to right some wrong.

History is replete with the names of those who found glory or infamy (or both) leading men into battle: Ghengis Khan, Alexander The Great, Spartacus, Scipio Africanus, Saladin, William Wallace, George Washington, Simón Bolivar, and on and on.

On today’s battlefields, most of the armed protagonists serve under the flag of a nation-state, or are engaged in a civil war as one faction arrayed against the state. American Soldiers, for example, fight under the U.S. flag, and for America and its interests, under the command of generals subservient to a civilian President. Yemeni rebels, meanwhile, fight the government of Yemen for control of the country, under the command of rebel leaders.

There are also those who fight on behalf of an ideological or religious faction (for example, Shining Path or al-Qaeda). They fight for religion or ideology, against whoever stands in the way of them realizing their utopia of choice. With the exception of a minuscule spattering of paid mercenaries found here and there — with limited to no real military power beyond that bestowed upon them by a nation-state — modern battlefields are essentially the domain of national powers, or those challenging them for political power as rebels or ideologues.

While the methods of fighting, the technology of warfare, and the strides made in communications technology have made the modern battlefield radically different from, for example, what a Roman legionnaire might have experienced just over 2,000 years ago, there are also similarities in what a modern G.I. experiences in a war zone and what a Roman soldier experienced fighting under the command of Caesar Augustus in 15 B.C.

Both an American soldier and a Roman legionnaire, for example, would have been able to sit around a fire, out in the field, and commiserate over having to hump their pack over the course of countless clicks (kilometers) before ever engaging the enemy. Roman soldiers in Augustus’ day carried roughly 40 pounds on their back, including food, cooking utensils, swords, and other weapons (according to historian Anthony Everitt, who wrote “Augustus” about the life of Rome’s first emperor). A modern American soldier carries that, plus some, while infiltrating on foot into an area of operations.

While this author does not doubt for a second that these similarities would have created an instant bond between the two soldiers of the two eras, there were also big differences in how the Roman legionnaires lived, fought, and served, and how an American Soldier does so today. Here are just five key differences that stand out:

Roman legions in the first century B.C. were generally loyal to a political leader, who also led the legion in battle as the commanding general. Julius Caesar, when he was assassinated in 44 B.C., for example, commanded the loyalty of a number of legions and political figures. After his murder, most of those legions transferred their loyalty to the great-nephew of the dictator, Octavian (who would later become Caesar Augustus thanks in large part to the power of those same legions).

It is hard to imagine — and quite frightening to contemplate — today’s American soldiers pledging loyalty to one general or political figure, dedicated to advancing his or her interests over those of the state writ large.

A Roman legion back in the early days of Augustus’ time either marched hundreds of miles from Rome to a field of battle, in say modern-day northern Italy, France, or Turkey, or they marched to a port city and then took a boat to the field of battle, in say modern-day Syria or Egypt. The Romans were renowned for the roads they built to link their empire to its capital, Rome. Those same roads also often provided the highway on which the legions marched to war. This often led to campaigns that could stretch from months into multiple years, as the legions extended their reach out from Rome.

Today’s American soldier, on the other hand, is blessed by the technology of modern air travel to allow him or her to return home from tens of thousands of miles away in one or two day’s travel time.

Not many innovations have changed the nature of warfare more than the adoption of gunpowder and firearms. Today’s American soldier fights from a distance that would’ve seemed downright expansive to a Roman soldier.

In the first century B.C., a Roman was expected to fight in a formation, lined up with his compatriots, and face-to-face with the enemy within mere feet of each other. The fighting would then take place with spear and sword, with a swapping out of the front line of fighters approximately every 15 minutes. Those 15 minutes of fighting were surely brutal, as swords slashed, archers loosed arrows, and spears were thrust.

4. How they were compensated

While today’s American service members receive a set base pay, tax incentives, special pays, free health care, and educational benefits, Roman legionnaires in the first century B.C. were forced to rely on the largesse of their benefactors for their “base” pay.

A politician paid his legions from his own wealth, and Roman soldiers also made do with the spoils of victory to supplement those incomes. They also had a retirement to look forward to, if they were lucky enough to live long enough to reach it.

When their fighting days were done, in the first century B.C., a Roman soldier would retire to a plot of land in the Italian countryside, or receive a payout equal to the value of such. This pension was set aside to grant to retired soldiers, so that they could live off the land, with their families, in peace. They would then often become prominent members of society, as well. Of course, today’s American soldier also receives a pension if he or she serves a mandatory minimum time on active duty (or an equivalent time drilling in the reserves). In both cases, the service of the soldier was rewarded and compensation provided.

While warfare has changed over the course of human history, and while these differences might seem large and significant, in reality, they are not. Nothing is as enduring as man’s capacity to inflict violence on his fellow man. The particulars might change over time, but the cruel and savage nature of war persists.

This article first appeared on Sandboxx and is being republished due to reader interest.