Was the 'Star Wars' Program a New Hope for Reagan? 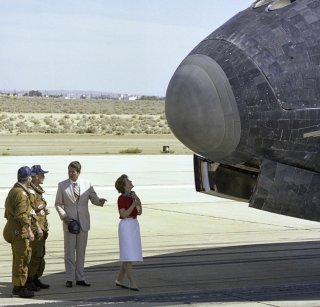 Here's What You Need To Remember: “The targets would be fast-moving, very small and thousands of miles away.”

A long time ago in an era much like ours, the United States poured billions into its “Star Wars” missile defense program. What those billions actually bought is still highly classified, so much so that we know very little about the various exotic space weapons conceived during the late Cold War.

One of those concepts—“Have Sting”—would have been the biggest gun in the solar system . . . had it ever been made.

Aerospace historian Scott Lowther has published some excellent diagrams of Have Sting, a proposed orbital railgun the size of the International Space Station. Having studied a General Electric report on the project, Lowther deduced a fair amount about the cannon’s characteristics.

“This vehicle appears to have everything such a system would need, from power to attitude control, sensors to thermal control,” Lowther said.

In a conventional gun, a chemical propellant expands and shoves a projectile down a long metal tube. In a railgun, pulsed electromagnetic fields replace the propellant and accelerate a conductive projectile to extreme speeds.

The pulsed fields generate along a pair of rails—hence the name—and the projectile travels down the rails like a surfer in a slot.

The longer the rails and the more electrical power the weapon can generate, the faster the projectile flies. And Have Sting’s projectiles might have generated velocities as high as 35,000 miles per hour. At those speeds—equal to a reentering spacecraft or falling meteor—a projectile as small as a can of beer could vaporize a hardened warhead.

The original report gave no dimensions for the vehicle, but its reactor—a known design—gave Lowther something to work with. A 265-foot-long truss would have supported Have Sting’s electromagnetic accelerator, a nuclear reactor, a cryogenic tank farm and phased-array radars as big as circus tents.

General Electric’s SP-100 reactor would have generated 100 kilowatts—enough for “peacetime” power and station-keeping. During wartime, the cannon would need even more juice. A multi-megawatt reactor would be too heavy to fly … so the designers turned to rocket science.

One of the most difficult engineering problems in spaceflight is how to feed tons of fuel and oxidizer into a rocket engine. Wernher von Braun’s team at Peenemünde found the solution still used today—the turbopump.

In a turbopump, rocket propellants mix together and ignite, but instead of producing thrust they spin a gas turbine which drives a fuel pump. You can sometimes see turbopumps in action during rocket launches by looking for small, separate flames of exhaust near the engines.

The turbopump inspired the turbogenerator—which replaced the pump with an electrical generator. Instead of moving tons of fuel per second, the device generates megawatts of power. Have Sting’s turbogenerator might have developed as much as 90 megawatts—more than twice the generating capacity of America’s futuristic Zumwalt-class destroyer.

To store liquid hydrogen and liquid oxygen for the turbogenerator, Have Sting would depend on large, Thermos-like tanks equipped with sun shields and an active refrigeration system. Presumably—though not discussed—some kind of orbital refueling system would have topped off or refilled the tanks.

Given the intended purpose of the weapon, however, orbital refueling during World War III would have been challenging.

A big gun is only as good as its aim. Most publicized “Star Wars” concept illustrations dispense with targeting systems either for clarity or secrecy. “Sensor systems on this scale are almost never depicted in artwork, yet they would be needed,” Lowther added. “The targets would be fast-moving, very small and thousands of miles away.”

Have Sting sported three huge 60 GHz phased-array antennas like giant dragonfly eyes on its business end. Other than that, this may be as much as we’ll know about Have Sting for a long while. Lowther has a Freedom of Information Act request pending but as he says, “chances of better definition are slim.”

Meanwhile, we can speculate about possible spin-offs of its technology. Railguns have long figured in space enthusiasts’ visions. However, all kinds of treaty obligations would need amending before the United States or anyone else fielded such a device.

A Have Sting-like space railgun could lob small, rugged cargoes to the moon and planets like a permanent, reusable, stay-at-home booster stage. Theoretically, an orbital railgun could bombard an incoming space rock with enough carefully targeted shells to alter its course without turning it into a flying gravel quarry.

But it may be that the turbogenerator will become the key legacy of “Star Wars.” A generation after the program ostensibly wound down, megawatt lasers and railguns have arrived. Demands for vast power in a compact lightweight package will only increase. Future warships might split seawater into hydrogen and oxygen to fuel tremendous blasts from exotic weapons.

Of course, the military should make sure such warships’ plans don’t fall into the wrong hands, and for goodness’ sake, don’t put a small thermal port anywhere a determined pilot could hit it.

Steve Weintz writes at War Is Boring, where this article first appeared.