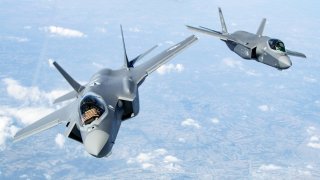 Key point: The F-35A demo team has gotten better and better, playing a key role in selling the much-maligned platform to the public.