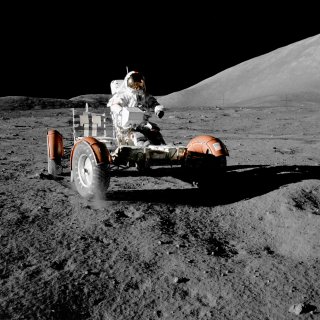 The example you just gave is the kind of thing which will result in another 50 years of some of these dreams not coming true — of not having colonies on Mars, colonies on the Moon. How do we avoid that? And do you think that we will, and that over the coming decades we will be on the Moon and we will be on Mars and have a substantive presence in those places?

So let’s make a distinction. I think the space economy that I imagined is literally driven by economics. People can do things in space, get information, make products that can’t be made on Earth and send them down. I think that will become a going enterprise in the next 10 to 20 years. It won’t need government support beyond the kind of government support that the railroads need or the airlines need or the highways need. There’ll be a structure in which that’s done, but private companies will be doing that. That may not seem that glamorous. If we’re making super fast optical fiber in orbit and jetting it or parachuting it back to Earth, how sexy is that? If it increases internet speeds 100 times, it’ll be nice. If it’s all done robotically, it may be a burst of attention and then just do what it does.

I don’t think there’s any economic reason to go to the Moon or go to Mars. Whatever resources those places have, those resources are only good for going further out in space. It will always be easier to get all kinds of valuable minerals right here on Earth than to go harness an asteroid and tow it this way and mine it and send the stuff down. The question of whether we’re going to establish permanent bases on the Moon with an eye to going to Mars, to me, is a question of exactly the kind of leadership and sort of clarity of vision and mission that we haven’t had between 1972 and 2010. Lots of presidents have announced lots of programs that didn’t happen. “We’re going to go to the Moon. Here’s why.” “We’re going to go to Mars. Here’s why. Here’s what we’re going to get from that.” And what I would say is I hope we do it.

No one said in 1961, “If we go to the Moon, we will create a kind of computer technology and an attitude toward computer technology that you cannot imagine, but that will come along five or 10 years quicker than it otherwise would have.” The economic benefit of that was huge. It was completely unexpected. I think if we go to Mars, we will learn things and we will develop tools that will be incredibly valuable back on Earth. I don’t think there’s going to be an economically thrilling reason to go to Mars that will make that self-sustaining. But I think that kind of aspirational mission is great for human beings. It’s part of being alive and we, as a society, can afford it.

We spend more on the Pentagon budget every year, $750 billion, that we have spent total in space since the last Moon landing. So one year’s Pentagon spending can buy you 20 or 30 years of dramatic space exploration. So again, we can afford it. And you know what? We have big problems: climate change, economic inequality, a sense of fading opportunity in some parts of the United States, the sense of being American. I think these big missions remind us what we can do. And I think when you look back at what it took to go to the Moon, if we want to tackle those big problems, we can tackle them. And so I hope, I truly hope, that we will have a permanent presence on the Moon that we will use that to teach ourselves to go to Mars, just because I think the benefits of that will be surprising and well worth the relatively modest cost compared to other things we spend money on.

My guest today has been Charles Fishman, author of One Giant Leap: The Impossible Mission That Flew Us to the Moon. Charles, thanks for coming on the podcast.

Thanks so much for having me.