We Should 'Sink' Our Aircraft Carriers (For a Really Great Reason) 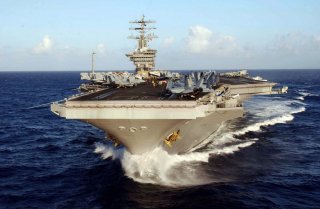 The U.S. Navy should convert USS Nimitz, the fleet’s oldest nuclear-powered aircraft carrier, into a test ship once the flattop decommissions in the mid-2020s.

That’s the recommendation of Navy lieutenant Douglas Cantwell, who served aboard the 1,092-feet-long carrier.

“The Navy needs a platform dedicated to accomplishing for air warfare what the USS Zumwalt and the Surface Development Squadron aim to do for surface warfare,” Cantwell wrote in Proceedings, the professional journal of the U.S. Naval Institute.

“The planned decommissioning of the USS Nimitz … in 2025 presents an opportunity,” Cantwell added. “Drawing on its past, the Navy should designate the Nimitz as CVN(X) and overhaul her into an experimental carrier.”

While fleet force-planning constantly changes, at present the Navy expects to maintain at least eight and as many as a dozen large nuclear carriers, or CVNs, for the foreseeable future. The sailing branch in early 2019 awarded shipbuilders a $15-billion contract for two new Ford-class CVNs.

Increasingly, the Navy’s big-deck amphibious assault ship with their Harrier and F-35B jump jets act as light carriers, complementing the larger CVNs. The Navy in its current round of force-structure analysis could decide to reduce the number of CVNs in favor of light carriers.

But carriers in any form increasingly are vulnerable to enemy anti-ship missiles. As a test ship, Nimitz could help the Navy to experiment with new systems that could allow the rest of the flattops to adapt during wartime, Cantwell wrote.

“Carriers cannot ignore emerging technologies,” Cantwell continued. “Advances in the speed, range, coordination, and accuracy of anti-ship weapons could turn them into modern equivalents of dreadnought battleships: invincible one day, seemingly obsolete the next.”

“However, neither champions nor detractors of continued investment in CVNs have tackled a question that will matter whether the CVNs retain primacy or fade into a support role: Assuming carriers remain in the fleet, what improvements would give them the best chance for victory?”

As he wrote in his article for Proceedings:

CVN(X)’s full-time mission should be to experiment in real-world conditions without being subject to routine tasking or a deployment cycle. Efforts to experiment with future naval airpower on carriers tasked primarily with supporting the national defense mission have been piecemeal, far less than what is required to maintain an edge over near-peer competitors, and incorporating changes into the Ford class without testing under real-world conditions has proved frustrating.

Proposals such as creating a new class of light carriers would be far more costly and time-consuming than retrofitting existing CVNs.

Having an experimental carrier for wargaming exercises and training with other ships in an “augmented carrier strike group” will allow the next generation of leaders to think beyond the limits of current doctrine, encouraging those who will fight the next war to shape the future of naval airpower.17

Even if the days of the CVN are numbered, experimenting with CVN(X) will help determine what modifications could ensure a robust support role for carriers. For example, what does a CVN optimized for defending itself and nearby surface combatants from missile attack look like?

If a CVN needed to carry a large silo of cruise missiles, where should they be located to not interfere with flight operations? What combination of manned fighters, armed unmanned vehicles and refueling and [surveillance] aircraft best support distributed maritime operations?

Without trial and error, the Navy is unlikely to arrive at the right answers.

Investing time and resources in carrier-based airpower amid doubts about its future is—to borrow a term made famous by Adm. Chester Nimitz—a calculated risk. But it is one the Navy must take before the shooting starts.