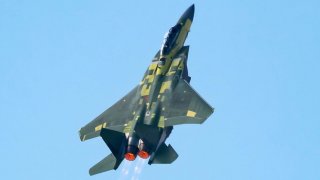 Boeing’s F-15EX, the most updated F-15 variant, took to the skies for the first time recently with all flight systems performing as expected during a 90-minute test flight. A video of the F-15EX’s takeoff flight — flying nearly vertical just after takeoff — can be seen here, and is worth the watch.

You can read more about the F-15’s long and storied history here. By any metric you wish to employ, there is no questioning that the F-15 is one historic fighter jet.

F-15EX: An Update of a Classic Design

In Boeing’s official announcement of the flight, Boeing vice president and F-15 program manager Prat Kumar said that the flight “proves the jet’s safety and readiness to join our nation’s fighter fleet,” noting the F-15EX’s “advanced battle management systems, sensors and weapons due to the jet’s digital airframe design and open mission systems architecture.” According to Boeing, the F-15EX’s ADCP-II computer is the “world’s fastest mission computer.”

As part of the United States’ National Defense Strategy, the U.S. Air Force is obligated to purchase 72 combat jets per year, and Boeing believes that their F-15EX is just the platform for the job. Earlier last summer, The Air Force awarded Boeing an eight-airframe contract, which Boeing believes may increase in the future to 144 aircraft or two year’s worth of new jets as per the National Defense Strategy. Those airframes will replace the older F-15Cs and F-15Ds currently in service with the Air Force.

The Air Force selected the F-15EX partly due to the rapidity with which the platform could be built and due to cost-effectiveness. The United States’ premier fighter, the F-22, had its production infrastructure taken offline in 2009, tying the Air Force’s hands. Their only other advanced fighter option was the F-35 — a program noted for a high price tag and production delays, and ultimately prompting their F-15EX acquisition decision.

Admittedly, the F-15 platform — even the advanced F-15EX — would struggle to survive on a modern battlefield against today’s air defenses, the Air Force sees the F-15EX as a viable platform however for “homeland and airbase defense, in maintaining no-fly zones where air defenses are limited or nonexistent, and in delivering standoff munitions.”

There is still a mission for what is essentially a fighter designed and built in the pre-stealth era. The Air Force envisions the F-15EX as a sort of weapon truck, able to carry large munitions that the F-35 cannot. The F-35 can carry less than 6,000 pounds of munitions internally, whereas the F-15EX can carry almost 30,000 pounds of munitions on its external pylons. On battlefields with modern air defenses, the F-35 could stealthily collect targeting data and relay it to an F-15EX, which could then utilize advanced low-observable or hypersonic munitions to eliminate enemy targets.

It seems there is still a mission for the F-15 airframe after all.