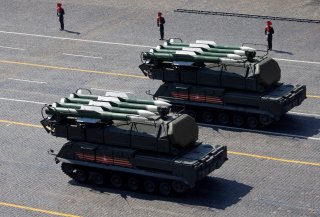 Here’s What You Need to Remember: Why is Russia pursuing a mobile S-550 BMD system as well? First, road mobility will facilitate the geographic dispersal of interceptor missiles, potentially extending or enhancing defense in areas distant from Moscow. That the S-550 will either remain similar or might even simply be an attachment to future mainstay S-500 air defense battalions is also logistically convenient.

Russian defense minister Sergei Shoigu casually dropped a bombshell when he mentioned during a press conference on November 9 that “the head of state [Putin] placed special emphasis on the importance of advancing the development of domestic air and missile defense systems, and the supply of S-350, S-500 and S-550 to the Armed Forces.”

While the medium-range S-350 and S-500 missiles were familiar, this was the first mention of a notional S-550 system.

The Russian military is preparing to induct the S-500 Prometey (Promethes) air defense systems in the 2020s after years of delay. Some experts initially speculated that the S-550 was a shorter range spinoff of the S-500, just as the S-350 was a medium-range missile complementing longer-range S-300 and S-400 systems. Russia’s TASS state news agency also recalled an S-550 mobile short-range anti-ballistic missile (ABM) system developed between 1981–1988, which never entered service.

However, Sergey Chemezov subsequently told reporters at the Dubai airshow the S-550 would be designed to detect and intercept ballistic missiles at a greater distance than the S-500 and that the physical components have already been created.

Now the consensus is that S-550 would be a mobile system specialized in strategic defense: defending against intercontinental-range ballistic missiles (ICBMs) that arc high into space before raining nuclear destruction at up to twenty times the speed of sound.

Russian sources also emphasize a “space attack” or “space defense” role which besides referring to kinetic anti-satellite missions might also include interception of spacecraft in low-earth orbit like the U.S. military’s X-37B. Unlike the S-500, there reportedly aren’t plans for a naval variant.

But when later interviewed by TASS, military expert Dmitriy Litovkin said he presumed it would “become an extra element of the Prometey system. It was earlier announced that this system would be able to shoot down both ballistic nuclear warheads and low-orbit satellites. Judging by everything, the military has made a decision to divide these functions between the two systems (the multitask option is not always good for a combat system).”

In a similar vein, an anonymous source told RIA Novosti the S-550 was “version of the S-500 air defense system and will specialize in missile and space defense tasks.”

These statements, which are by no means definitive, could mean the S-550 is simply the S-500’s missile defense capability spun off and perhaps improved to be more reliable against ICBMs. It’s unclear if that means the basic S-500 will therefore end up less capable at missile defense than initially promised, or if the S-550 will end up being substantially more effective against ICBMs than was expected of the S-500.

RIA Novosti’s sources also boast that the S-550 is the first road-mobile system capable of reliably killing ICBMs, also claiming it could go “an order of magnitude higher than . . . [U.S.] THAAD and Aegis with SM-3 Block llB missiles.”

Both cited U.S. systems are mobile (on truck or ship) but are aimed at defending against short-to-intermediate-range missiles that don’t fly as high or as fast—though they do possess some modest anti-ICBM capability. This is particularly true of the SM-3 Block IIA, which successfully shot down an ICBM in a test in  November 2020 and reportedly has a maximum reachable altitude of 1,460 miles.

The official, quoted by RIA, does not mention the United States’ silo-based ground-based missile midcourse (GMD) system, designed for mid-course intercepts of ICBMs. Likely the S-550 is expected to occupy a middle ground between the SM-3 Block II and GMD, perhaps with decent anti-ICBM capability but out to a more limited range.

Past, Present and Future of Russian BMD

Russia already has an anti-ICBM missile defense system, the silo-based A-135 Amur which launches 53T6 ABM interceptors that can attain up to seventeen times the speed of sound to swat down ICBMs using a ten-kiloton nuclear warhead. But the A135 only defends Moscow and the surrounding industrial areas. That’s because the 1972 ABM Treaty only permitted Russia and the United States to deploy two ABM sites: one at the capital and one to protect ICBM silos.

However, in 2002 the United States exited the ABM treaty and began the development of the GMD missile defense system now situated in silos in Alaska which provides country-wide protection of the continental United States, albeit with a limited inventory of just over forty (going on sixty) interceptors.

The limited ABM count was in part meant to reassure Russia and China that GMD wasn’t intended to undermine their nuclear deterrence capability, only to suppress threats from smaller potential nuclear actors (ie. North Korea, and Iran). However, Beijing and Moscow saw things in a different light, and to date have spent tens of billions of dollar-equivalents developing more sophisticated nuclear weapons to defeat GMD.

It’s worth noting that even a limited ICBM defense might potentially defeat a small-scale nuclear attack by a great power intended to achieve limited military objectives or to serve as a political demonstration.

With the S-550, Russia finally seems to be taking advantage of the rupture of the ABM Treaty to expand the coverage of its counter-ICBM defense beyond the Moscow region. Currently, the A-135 is being replaced by a modernized A-235 Nudol ABM which may greatly extend range of missile defense coverage over western Russia, and incorporate hit-to-kill missiles to either complement or replace entirely the nuclear interceptor missiles.

But why is Russia pursuing a mobile S-550 BMD system as well? First, road mobility will facilitate the geographic dispersal of interceptor missiles, potentially extending or enhancing defense in areas distant from Moscow. That the S-550 will either remain similar or might even simply be an attachment to future mainstay S-500 air defense battalions is also logistically convenient.

But perhaps most importantly, mobile platforms are more difficult to locate and destroy using stealth aircraft and cruise missiles that would surely attempt to suppress Russian air defenses in a high-intensity conflict with the United States.

Ballistic missile defense against conventional (ie. non-nuclear) missiles may also become much more important to the Russian military in the near future than it has heretofore been.

That’s because, with the death of the Intermediate-Range Nuclear Forces treaty, the U.S. military is inducting a wide range of new medium-range missile weapons, including non-nuclear hypersonic glide vehicle weapons launched by U.S. Army trucks and Navy submarines. That means that even in a conflict that doesn’t go nuclear, Russian BMD regiments might have their hands full mitigating attacks from such weapons.

Of course, this would also invoke dilemmas as to determining whether a dual-capable missile attack is conventional or nuclear, as well as deciding how many high-end missile defense interceptors, if any, to expend repelling conventional attacks when there still looms the possibility of a nuclear strike down the line.

Russia’s expanding BMD capability could also end up impacting U.S. missile defenses in a sort of self-perpetuating feedback loop. That is if Russia fields a large number of long-range anti-ICBM anti-ballistic missile interceptors, then Washington might decide it has the grounds to expand its inventory of GMD interceptors beyond the current plans for sixty. Another factor is China, which has not deployed an operational BMD system but which reported conducting a midcourse ballistic missile interception test using an HQ-19 missile in April 2021.

TASS has reported that the S-550 could enter service as soon as 2025. However, that date should not be treated as firm given that initial S-500 deliveries were originally claimed to be due in 2016 or 2017.