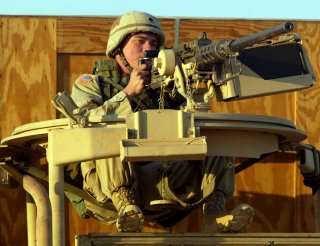 Here's What You Need To Remember: The design, originally conceived in 1917, has been upgraded in small ways - flash suppressors and quick-release barrels have been added. But the Browning is living testament to the old adage: if it ain't broke, don't fix it.

The venerable M2 Browning machine gun was first developed during World War I. The Great War had witnessed the development of faster aircraft that were more heavily armored than earlier balsa wood and canvas birds. Tanks, as well, began to slowly slog across the Western Front from both British and French lines. Though cumbersome, the tank began to find its niche on the battlefield—and was also impervious to most rifle rounds and some artillery.

Though the standard American service cartridge, the .30-06 Springfield, was a high-powered rifle cartridge, it struggled to inflict damage on up-armored planes. The Americans wanted something that had both the range and the stopping power to reliably take down German biplanes. So they consulted with perhaps the best gunsmith the United States ever produced: John Moses Browning.

Browning used the venerable .30-06 cartridge as a parent case for designing a newer heavier round. By increasing the .30-06 case dimensions, Browning created a much larger cartridge, the .50 Browning Machine Gun cartridge. The .50 BMG is a massive round. Its overall length is nearly 5.5 inches (or 140 millimeters) and the bullet itself is just over a half-inch in diameter. The .50 BMG is highly regarded for its enormous stopping power and accuracy at extreme distances. Several record-setting long-distance shots were achieved with the .50 BMG.

To fire the .50 BMG, Browning turned to another proven machine-gun design, the M1917. After scaling up the M1917 design and incorporating a few changes, the resulting machine gun was ready for testing. Though the machine gun was eventually adopted, it was water-cooled and therefore quite heavy. High weight meant the design was used mostly in static firing positions and was unsuitable for use on aircraft.

Eventually, the design was reexamined and redesigned during the interwar years. Refinements made to the new design reduced weight by switching from a water- to air-cooled barrel. The resulting design is what is now easily recognized as the M2 Browning Machine Gun.

The M2 was employed in both anti-infantry and anti-aircraft roles during its World War II combat debut, and where it was alternatively used against armored personnel carriers and low-flying enemy planes by targeting their engine blocks, and against infantry.

The M2 or “Ma Deuce” as the heavy machine gun is sometimes called, has served in every war since it was adopted by the United States, from World War II to the present. It is prized for its enormous stopping power and long-range.

Millions of units have been produced, including in the United States and abroad, a testament to the effectiveness of Browning’s design. Very few changes have been incorporated into the design since its introduction, though the new standard variant is the M2A1. It has a slotted flash suppressor that significantly reduces muzzle flash, a new quick-release barrel for rapid barrel changes during extended firing, and a fixed headspace that prevents the M2’s internal parts from becoming improperly aligned after recoiling.

The M2 has a proven track record in combat in a variety of roles—against armored and unarmored targets, and both mounted and dismounted infantry. There’s no reason to think Ma Deuce will be replaced anytime soon—it’s here to stay.

Caleb Larson is a defense writer with the National Interest. He holds a Master of Public Policy and covers U.S. and Russian security, European defense issues, and German politics and culture. This article first appeared earlier this year.