What Americans Can Learn From the Battle of the Bulge 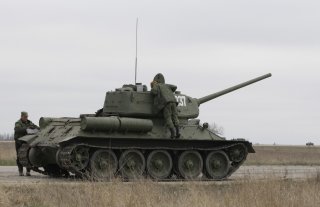 Here’s What You Need to Remember: Don’t underestimate the enemy.

On a cold, foggy morning 77 years ago, the U.S. military nearly suffered one of its worst defeats.

From out of the misty forests of the Ardennes region of Belgium, 30 German divisions and more than a thousand tanks and self-propelled assault guns emerged in a surprise offensive known as the Battle of the Bulge. Hitler’s plan was a long shot: attack the center of the Allied lines in Northwest Europe, split the American and British armies in two, encircle and destroy the American armies, and capture the vital Belgian port of Antwerp. Maybe – just maybe – Operation Wacht am Rhein (Watch on the Rhine) could save the Third Reich before it was crushed between the Allied armies from the West and the Soviet armies from the East.

For a few terrifying days, it seemed as if Hitler’s fantasy might come true. An exposed U.S. infantry division was surrounded and then surrendered, artillery and supply units were overrun, and U.S. commanders and troops seemed stunned and confused.

But the Nazi gamble failed. Five months later, Hitler blew his own brains out as Soviet troops closed in on his Berlin Fuhrerbunker, and the Third Reich became nothing more than an awful memory.

What can today’s American military learn from the Battle of the Bulge? From three-quarters of a century later, it’s hard to believe there are many lessons from a time when there were no drones or smart bombs — when most infantry marched on foot, fighter planes used propellers instead of jets, and many armies (including the Germans at the Bulge) hauled their supplies by horse-drawn cart.

But some lessons are universal, no matter the era. American commanders and soldiers managed to snatch victory from the jaws of defeat. What they did right – and what they did wrong – is still relevant today.

Lesson One: Don’t underestimate the enemy.

The Allies failed to expect a German counteroffensive for a simple reason: it’s not what the Allies would have done in Hitler’s shoes.

During the summer of 1944, the German armies in Normandy had been smashed and routed, while Operation Bagration — the massive Soviet offensive in Byelorussia — had inflicted 500,000 casualties and wiped out Germany’s Army Group Center. American troops were on German soil, and the Red Army was 50 miles from Berlin. There seemed little prospect that the Germans could rebuild their forces to mount a strong defense, let alone mount a major counteroffensive. Indeed, with manpower and armaments depleted by five years of war, German cities pulverized by American and British bombers, and the Third Reich desperately short of oil, any rational leader would have surrendered. Despite some intelligence indicators of a counterattack, the Allies assumed that the Germans would take the rational, sensible decision to play defense.

But if Hitler were rational and sensible, there never would have been a World War II. And Allied commanders who had fought in two World Wars should have remembered this fact above all: the German military had an incredible ability to regroup and keep on fighting. Within weeks of the Normandy and Byelorussian disasters, the Germans had begun rebuilding their armies. Not to their peak of their blitzkrieg prowess in France and Russia in 1940-1941, but enough to shatter a thin American line.

Lesson Two: A calculated risk is not a foolish risk.

In late 1944, the Western Allies had 70 American, British, Canadian and French divisions in Europe (not counting the Italian front). That sounds like plenty compared to the 10 Regular and 8 National Guard divisions of today’s U.S. Army, but not for a 500-mile front stretching from the North Sea to Switzerland in a big-unit war where dozens or even hundreds of divisions might be committed to a single battle like Normandy or Kursk. Gen. Dwight Eisenhower, the Allied supreme commander, favored a controversial “broad front” strategy of attacking all across the front to stretch the German defenses, rather than the narrow thrust that British commander Field Marshal Bernard Montgomery advocated.

But with a limited number of divisions and the Western Allies running short on manpower, any strategy would have required concentration at some points and weakness in others. Nor was it a mistake to choose the Ardennes as that weak point: the wooded, hilly terrain was such poor tank country that even Hitler’s commanders thought the German plan was much too ambitious.

Lesson Three: Always have a reserve.

A theater-level commander like Eisenhower couldn’t really control how a battle like the Bulge was fought at the operational or tactical level. What he could do — what he was supposed to do — was to ensure that there was a strategic reserve that could quickly respond to any emergency. When the Germans attacked, the Allied strategic reserve consisted of just two lightly armed airborne divisions refitting after the Operation Market-Garden debacle.

The paratroopers of the 101st and 82nd Airborne – along with numerous other units, many of whose exploits were never recorded by history – barely managed to hold the vital crossroads of Bastogne and other key towns that blocked the German advance. Had Eisenhower lacked even that slender reserve, the Bulge just might have resulted in at least a partial German victory.

When Hitler and his top aides conceived of the Ardennes Offensive, they counted on a few things, such as bad weather grounding the Allied air forces. But just as important was the assumption that the Allies could not respond quickly: the Germans believed that by the time reinforcements arrived, the panzer divisions would have reached Antwerp and sundered the Allied front.

But feisty General George Patton proved Hitler wrong. Already suspecting that the Germans might attack, Patton quickly reacted to news of the Ardennes offensive by wheeling elements of his Third Army 90 degrees, and dispatched a relief force northwards towards the Ardennes.

“I can attack with three divisions in 48 hours,” he announced. Patton’s superiors didn’t believe it was possible, and unfortunately for the Germans, neither did the Wehrmacht. But on December 26, the siege of Bastogne was broken – and so was the German offensive.

Despite initial surprise and confusion, the Americans did display enough flexibility to stitch together a defense, and then eventually counterattack and drive back the Germans.

The Battle of the Bulge was primarily fought and won by Americans, and to them belongs the glory. And yet, America’s allies also deserve some credit. British troops under Field Marshal Bernard Montgomery quickly moved to backstop the U.S. Army and keep the Germans from crossing the Meuse River to reach Antwerp. Just as important, Montgomery took command of the northern half of the Bulge salient, including the U.S. troops there. Though tactless and egotistical, he was a well-organized commander who restored order – or “grip,” as he called it – when American command and control was in disarray.

As for the Soviets, 75 percent of the German army fought on the Eastern Front. Had the Soviets surrendered in 1941 – or made a separate peace with Germany, as some feared – the Western Allies would have fared far worse at the Bulge and elsewhere.To Hitler, allies were just tools to be used and discarded as needed. Not surprisingly, he was convinced the Grand Alliance between America, Britain and the Soviet Union was unnatural and would fall apart, enabling Nazi Germany to defeat its enemies piecemeal. But as with so many of his predictions, Hitler was proved wrong. The Grand Alliance would eventually fall apart during the Cold War. But not in time to save the Third Reich.

The irony is that none of these lessons are really new: Julius Caesar and Napoleon Bonaparte learned them long before Eisenhower and Patton did. And as America prepares for conflicts in the 21st Century, they are still relevant today.

Michael Peck is a contributing writer for Forbes. His work has appeared in The National Interest, 1945, Foreign Policy Magazine, Defense News and other publications. He can be found on Twitter and Linkedin.