What Australia’s B-21 Decision Means for Deterrence 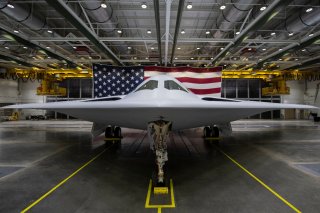 The recent ASPI report by Marcus Hellyer and Andrew Nicolls is a welcome addition to the B-21 debate in Australia. In the report, Hellyer and Nicolls cite Michael Mazarr, a senior political scientist at the RAND Corporation, and define the concept of deterrence by denial as ‘having sufficiently robust capabilities to convince an adversary that the cost of acting militarily against Australia isn’t worth any gains that might be made’.

However, that’s not quite correct. In the paper cited, ‘Understanding deterrence’, Mazarr defines deterrence by denial as seeking ‘to deter an action by making it infeasible or unlikely to succeed, thus denying a potential aggressor confidence in attaining its objectives’; he gives ‘deploying sufficient local military forces to defeat an invasion’ as an example. This is very different from simply raising the cost of any gains.

In fact, if you are only looking at raising the cost of gains, then you are engaging in deterrence by punishment. Mazar defines deterrence by punishment as threatening severe penalties (costs) if an attack were to occur. This distinction was first established by Glenn Snyder, and has since been explored more by Lawrence Freedman, to show that punishment is not just about counter-value targeting (hitting an adversary’s homeland) but about inflicting unacceptable military losses.

But why does this pedantic definitional distinction matter?

The difference between assuring an adversary that you will defeat their attack, as opposed to only imposing costs, will dictate, first and foremost, just how many platforms you need render an attack infeasible. To declare a strategy of denial, Australia would therefore require a fleet of B-21s (as a joint force) capable of defeating an adversary’s attack, not just inflicting losses. Any quick calculation of how many platforms it would take to do that would drive the force structure designers to require (among other capabilities) a larger fleet than a force that’s only expected to exact costs.

The difference in the two strategies will also affect the operational tempo required of the fleet (and of the force as a whole). Deterrence by denial would require more frequent, more intense and larger demonstrations of the capability to defeat an attack than deterrence by punishment. The B-21’s contribution to a joint force’s ability to render attacks infeasible would place significant strain on a fleet. That would be especially so if the strategy called for denial but there was only enough money for a fleet that could inflict punishment. The distinction between the two strategies has real implications for how operational planners would have to use the B-21.

Lastly, the distinction affects alliance relationships. The US is well versed in deterrence. It has a strong scholarly capability and institutional memory. Therefore, if Australia were to say that it was going to enact a deterrence-by-denial strategy and join the B-21 program, then it would set up expectations in Washington that it will acquire a larger fleet than it intends to acquire, and that it will exercise more frequently than it plans to exercise. Anyone who has worked with the US in the Australian Department of Defence can point to an example where the US military came to an event with a size and scale that Australian forces just couldn’t match—and sometimes that Australia didn’t want. For example, exercising capabilities in the region with a large denial force and its attendant size and tempo can have unwanted consequences for Australia’s immediate neighbouring countries. If Australia is going to speak the language of deterrence with its biggest ally, it must make sure they are defining deterrence in the same way.

Hellyer and Nicolls’s report expertly analyses the arguments for and against the B-21, and importantly it outlines the alternative options. In addition to the analysis, it is essential to clearly define Australia’s strategic intent, and then match that to the capability options that are on the table. I strongly suspect that while Australia may wish to deter by denial, it would only be able to afford and sustain a B-21 fleet (and consequently a force structure) that can inflict deterrence by punishment—and that distinction matters.

This article was first published by ASPI’s The Strategist.

Gregory MacCallion is a senior managing consultant at OCRT, based in Copenhagen. He conducts research for the Department of Defence on deterrence. The views expressed in this article are his own and do not represent the position of OCRT or the Australian government.