What Can the Clouds Over Antarctica Tell us About the Climate? 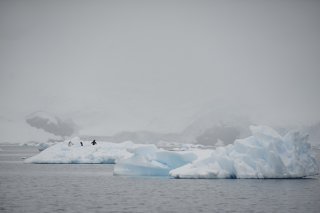 The Southern Ocean is a vast band of open water that encircles the entire planet between Antarctica and the Southern Hemisphere landmasses. It is the cloudiest place on Earth, and the amount of sunlight that reflects off or passes through those clouds plays a surprisingly important role in global climate. It affects weather patterns, ocean currents, Antarctic sea ice cover, sea surface temperature and even rainfall in the tropics.

But due to how remote the Southern Ocean is, there have been very few actual studies of the clouds there. Because of this lack of data, computer models that simulate present and future climates overpredict how much sunlight reaches the ocean surface compared to what satellites actually observe. The main reason for this inaccuracy is due to how the models simulate clouds, but nobody knew exactly why the clouds were off. For the models to run correctly, researchers needed to understand how the clouds were being formed.

To discover what is actually happening in clouds over the Southern Ocean, a small army of atmospheric scientists, including us, went to find out how and when clouds form in this remote part of the world. What we found was surprising – unlike the Northern Hemisphere oceans, the air we sampled over the Southern Ocean contained almost no particles from land. This means the clouds might be different from those above other oceans, and we can use this knowledge to help improve the climate models.

Clouds are made of tiny water droplets or ice crystals, or often a mixture of the two. These form on small particles in the air. The type of particle plays a big role in determining whether a liquid droplet or ice crystal forms. These particles can be natural – like sea spray, pollen, dust or even bacteria – or from human sources like cars, stoves, power plants and so on.

To the untrained eye, an ice cloud and a liquid cloud look much the same, but they have very different properties. Ice clouds reflect less sunlight, precipitate more and don’t last as long as liquid clouds. It matters to the weather – and to climate models – what kinds of clouds are around.

Climate models tend to predict too many ice clouds over the Southern Ocean and not enough liquid clouds when compared to satellite readings. But satellite measurements around the poles are hard to make and less accurate than other regions, so we wanted to collect direct evidence of how many liquid clouds are actually present and determine why there were more than the models predict.

This was the mystery: Why are there more liquid clouds than the models think there are? To solve it, we needed to know what kinds of particles are floating around in the atmosphere around Antarctica.

Before we went down there, we had a few clues.

It’s hard to directly measure the composition of particles over the Southern Ocean – there simply aren’t very many particles around. So, to help us track down what is inside the clouds, we used an indirect approach: the bacteria in the air.

The atmosphere is full of microorganisms that are carried hundreds to thousands of kilometers on air currents before returning to Earth. These bacteria are like airborne license plates, they are unique and tell you where the car – or air – came from. Since scientists know where most bacteria live, it’s possible to look at the microbes in an air sample and determine where that air came from. And once you know that, you can predict where the particles in the air came from as well - the same place the bacteria usually live.

In order to sample airborne bacteria in this remote ocean region, one of us headed out on the Australian Marine National Facility’s R/V Investigator for a six-week expedition. The weather was unruly and the waves were often white-capped, but for one to two days at a time, we sucked air from the bow of the ship through a filter that caught the airborne particles and bacteria. We then froze the filters to keep the bacterial DNA intact.

In most ocean regions around the world, especially in the Northern Hemisphere where there is a lot of land, the air contains both marine and terrestrial particles. That’s what we expected to find down south.

With the frozen filters safely back at our lab in Colorado, we extracted DNA from the bacteria and sequenced it to determine what species we had caught. Much to our surprise, the bacteria were essentially all marine species that live in the Southern Ocean. We found almost no land-based bacteria.

If the bacteria were from the ocean, then so were the cloud-forming particles. This was the answer we were looking for.

Ice nucleating particles are very rare in seawater and marine particles are very good at forming liquid clouds. With mostly marine-based particles in the air, we’d expect the clouds to mostly be made of liquid droplets, which is what we observed. Since most models treat clouds in this region the same way they do clouds in the dustier Northern Hemisphere, it’s no wonder the models were off.

Now that we know the summertime Southern Ocean clouds are being formed from purely marine particles, we need to figure out if the same is true in other seasons and at higher altitudes. The larger project, which involved planes as well as ships, has given atmospheric scientists a much better idea of the clouds both close to the ocean surface and high up in the atmosphere. The climate modelers among us are already incorporating these new data into their models and will hopefully have results to share soon.

Discovering that the airborne particles over the Southern Ocean are mostly coming from the ocean is a remarkable finding. It not only improves global climate models, it also means we confirmed the Southern Ocean is one of the most environmentally pristine regions on Earth – a place that has probably changed very little due to human activities. Our work will hopefully improve climate models, but has also given researchers a baseline for what a truly pristine marine environment looks like.